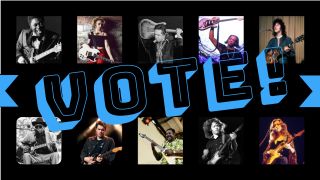 Total Guitar magazine are working on a landmark issue and they need your help. They want to know who you think are the greatest guitarists of all time – and they’re breaking it down by genre.

First up is arguably the most important genre in guitar playing and the roots of most of the music we play today: the blues.

The great blues players have echoed through the ages. The things that they valued are still the things that get most guitarists out of bed in the morning: great riffs, amazing tone, *feel*, rhythm, outstanding performance and stinging solos.

With so much genuinely trailblazing guitar playing made over SEVEN DECADES, we're asking you to answer the ultimate question: who are the greatest blues guitar players?

It’s a near-impossible task, but if anyone can do it, you can. We’ve listed 30 greats to get you started. Every vote counts – you can vote for as many of the guitarists below as you like. You might have your own favourite that isn’t on there – simply write your suggestion at the bottom of the poll.  The winners will be the ones with the most votes, simple as that.

We'll be announcing the results in the coming weeks – and Total Guitar will be telling you everything you need to know, including how to play just like them – so make sure to check back to see how your favourites fared.