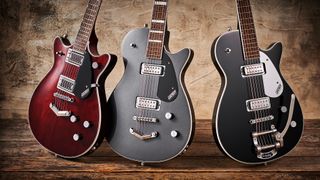 Maybe it’s because Gretsch came of age at a time when rock ’n’ roll was the big bang moment for youth culture that it will always be a heritage brand. Maybe it’s simply a case of the classics never going out of style.

But for all the revisions it has made to its line-up over the years since the Gretsch plant in Brooklyn, New York was a mid-50s epicentre of cool, there’s something unchanged about its guitars, as though they were unearthed in Grandpa’s attic. Take this month’s Jets.

We’ll start with the baritones, the G5260 and G5260T, the T for tremolo. These have a 29.75-inch scale to accommodate low tunings such as baritone (B E A D F# B) or A standard (A D G C E A) without the strings going floppy, yet it looks and feels uncannily like a super-sized Duo Jet.

Then there’s the G522 Double Jet, Double Jet as in double-cut, that’s finished in a deep red Walnut Stain. The Electromatic versions of today might have subtle changes in build - they are built in China, there are newly-designed pickups - but the fundamentals remain unchanged, with a chambered mahogany body offering that lightweight Gretsch experience.

Whether in baritone tunings or at concert pitch, these are all designed to twang. It’s just a question of which register you want to park yourself in. Let’s take a look and see which one is right for you.

Baritones might have enjoyed a surge in popularity in recent years with metal players looking to put them into the service of high-end, low-end chug but they are nothing new, and were originally designed for less musically-destructive applications.

Hitherto their destructive potential would have been restricted to demarcation disputes with musicians’ unions; are you a bassist or a guitarist? Well, using this you are kind of both.

Picking up the G5260T, that’s the first thing that hits you. It’s a six-string, the geometry seems in proportion, familiar, and that neck profile, a shallow C, is never going to fool you in a blind taste test with a P-Bass, but it sure does feel like a different instrument; like a bass. This is how baritones were originally intended. Duane Eddy, a man whose tone should

be listed in all good dictionaries under ‘twang’, used a Danelectro Longhorn 4623 liberally - most famously on 1959’s The Twang’s The Thang - and his signature tone was faithfully transposed to the longer 30-inch scale instrument. You’ll find the same experience with the G5260T.

It has a solid mahogany body, a big ol’ slab with a similarly-scaled maple neck with a four-bolt heel, and once you catch your breath after hearing the low sixth-string - here tuned to A - rumble for the first time, you’ll be struck by how much of that Gretsch elastic growl is in its tone. The musical possibilities soon stretch out in front of you.

As Gretsch guitars go, the electronics are simple. There are two mini-humbuckers, G-Arrow master volume and tone controls, and a three-way pickup selector. Clean, dry tones reveal a baseline piano-esque bass tone, ideal for sitting under the hurdy-gurdy clang of a modern beat combo, but dial in some spring reverb, some tremolo and slapback delay and you’re back in the orbit of 50s rock ’n’ roll tones.

Here, the G5260T truly excels, with the Bigsby-licensed B50 vibrato on hand to provide a little wobble to those oh-so-dreamy chords.

If you liked Vinnie Bell’s playing on the Twin Peaks soundtrack then the G5260T is a fun entry-point into that world.

For all intents and purposes, the G5260 is pretty much the same guitar as the G5260T. It, too, has the solid mahogany body and the bolt-on maple neck. The scale is a similarly generous 29.75 inches.

The fingerboard is laurel - as is it is across the 2020 Electromatic models - and you’ve got the same electronics, with a pair of gnarly proprietary mini ’buckers with master volume and tone and a three-way selector for dialing in the tones.

The anchored Adjusto-Matic bridge is identical. So why does it feel different? Why the subtle variation in sound? Well, it sure isn’t the block inlay. Maybe it’s to do with the V-Stoptail, which offers a solid zero-wobble anchor point for your strings, and the imagination, too.

Sometimes there is no getting by the power of suggestion. The G5260 could be deployed in almost all the same situations as its Bigbsy-equipped sibling, but there’s something about its tone, the sharper attack, and the promise of a fuss-free experience - the Bigsby can be a fiddle - that make this a baritone for sitting in the pocket, partnering up with the drummer as the rhythm section, or digging in for some super-aggressive low-end playing.

The factory settings say rock ’n’ roll, but the clarity and heat of those mini-humbuckers makes the G5260 suitable for all kinds of mischief. Clean, it’s ideal for playing country basslines.

With a splash of spring reverb you can put a new spin on your surf rock playing. Indeed, approaching the baritone from a regular six-string is a transformative experience, and thanks to its skinny-ish neck, the G5260 isn’t too intimidating.

If your amp can handle it - and this will reward those who invested in a combo with a 12-inch speaker - the G5260 has a lot of range for playing distorted. You can imagine some alt-metal acts getting a lot of high-volume joy from the G5260 and a fuzz box.

The question is whether drowning out its natural twang is worth it.

If your eyes are watering and fretting hand is in paroxysms of psychosomatic tendonitis at the mere prospect of playing your go-to rock and blues riffs on the wide-open spaces of a 29.75-inch scale guitar, then worry not, the G5222 Double Jet returns us to familiar territory.

In fact, after adjusting your style to get the most out of the baritones, the Double Jet feels like a toy. Its neck has got a fairly skinny profile - a “thin U,” says Gretsch - that welcomes all styles, with a short-ish 24.6-inch scale and a flat-feeling 12-inch fretboard with 22 medium-jumbo frets.

This all adds up to feel reassuringly contemporary, despite being on a guitar that’s all about finding tones that predate the color TV. The neck is glued to the body. Channeling classic Jets of yore, it has a chambered mahogany body with maple top that keeps it light and resonant.

When it was unveiled at NAMM 2020, the main talking point was the newly-designed Black Top Broad’Tron pickups. These are controlled by a master volume control mounted on the treble-side horn, with individual volume controls for each pickup and a master tone control.

Gretsch’s four-knob setup might seem a little complicated, but it makes perfect sense when interacting with a pushed valve amplifier. It gives you total control over the guitar’s tone, with the master volume’s treble bleed circuit allowing you to roll back the volume without losing any brightness.

The Black Top Broad’Tron pickups are wound quite hot as Gretsch pickups go, but retain the sort of balance you would expect.

The bridge pickup has plenty of trebly attitude. Taking the tone control back a little and it rounds off some of that meanness quite nicely. Select both pickups together and kick on some overdrive or fuzz and you’ll find the Double Jet in classic rock territory where there’s no shortage of midrange sustain.

The neck pickup rounds out the tone without killing the harmonics. It’s seriously addictive. But then you’ll have to wean yourself off that bridge pickup to get there. That won’t be easy.

There’s no question that the Jet Baritones are specialist instruments, but at the Electromatic price-point they sure are tempting for anyone looking to add a baritone to their game. There was little fuss with either baritone. Intonation and tuning was solid. Once you get used to the sound fretboard geography and the weight, they are eminently playable instruments.

The Bigsby-licensed B50 vibrato is stable, and although it is naturally a lot stiffer, with less give than those equipped on your regular standard-tuned six-strings, it turned an instrument that was built for the rhythm section into something capable of taking the lead.

Using this with tape echo and experimenting with reverb, it really does become transcendent. That said, there’s something about the simplicity of the G5260. The V-Stoptail is super tidy. If you don’t think you’ll use the Bigsby much, save some money on the G5260.

The Double Jet, meanwhile, is a no-brainer if you are looking for a rock ’n’ roll machine. The V-Stoptail looks great on it. The Walnut Stain finish is more red than walnut and incredible.

The Black Top Broad’Trons are just about hot enough. We would have preferred a fatter neck but that might be an unpopular opinion. Nonetheless, the Double Jet is so accessible, so easy to get a tune out of. Rock, country, blues? All the above and more. Love AC/DC but can’t spring for a Malcolm Signature? Well, the Double Jet is available in Aged Natural finish, and the bridge pickup here says “Buy me now.”