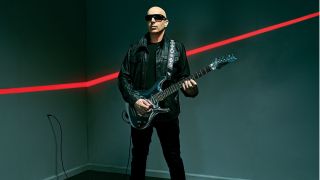 When we sat down with Joe Satriani to talk about his new album, Shapeshifting, he was quick to give the next generation of shredders props for always challenging the limits of what is possible with the electric guitar.

But as there is perhaps no one in the guitar world's post-Van Halen era to have pushed those limits than Satriani, naturally there was no shortage of players willing to testify to Satch's greatness, and explain what it is about his playing and songwriting that has kept him atop shred mountain in all these years.

Here we speak to a prodigiously talented trio to talk about Satriani's influence. There is Nick Johnston, the Canadian shredder who has a similar gift for balancing phenomenal shred chops with a sense of freewheeling fusion.

Then we've got Lari Basilio, the Brazilian virtuoso who has welcomed Satriani to the studio to guest on her album and joined the G4, and Plini, whose technique and feel for out-there compositions sets him apart.

Canadian virtuoso and Schecter signature artist Nick Johnston has been melting minds since his 2011 debut. Much like Satch, he’s lauded thanks to his knack for choice – sometimes unusual – notes that feel infinitely more dramatic than busier lines.

“Before listening to Joe, I don’t think I understood how important a role the melodies played in building compositions," Nick says. "He would place the solo in a different spot than everyone else, and open his songs in different ways, he would play the melody refrain in a higher octave, he would use effects differently and wasn’t afraid to be dynamic and pull emotion out of three notes.

"As I dove deeper, I realised he was the guy who’d really figured it out – the balance of technique, tone, melody and production. While players were learning blues from Hendrix and Clapton, I was learning them from Satriani.”

Born to a musical family in São Paulo, Suhr endorsee Lari Basilio has been recording her own music since 2011 and has gained some serious online traffic thanks to her exquisitely rhythmic fingerstyle approach.

Not only does Satch himself make an appearance on her latest full-length, Far More, but he also invited her to be part of the 2019 G4 Experience tour, making her the first female artist to do so.

She says, “Flying In A Blue Dream is probably the song from Joe Satriani that I listened the most in my life. I remember listening to it on the bus on my way to my guitar class and feeling so inspired. Besides his amazing skills and technique, his melodic sense was what caught my attention in the first place.

“His approach to writing these beautiful songs and melodies is so unique that I immediately learned that there were ways to make the guitar really sing. It all brought me a new perspective about instrumental music and definitely was a huge influence to me, since the formation of my style to this day. Satriani’s melodies are a true gift to this world and we’re are blessed to have them to listen to!”

Australian guitarist Plini released his debut solo record, Handmade Cities, in 2016 to high acclaim. Steve Vai described the album as “one of the finest, forward-thinking, melodic, rhythmically and harmonically deep, evolution of rock/metal instrumental guitar records I have ever heard” and the 27-year-old Strandberg player was named MusicRadar’s Best Prog Guitarist the following year…

“Joe Satriani was one of my first guitar heroes. I learned so much from him – phrasing, approaches to melody and harmony, tone… the list is endless.

“Learning The Journey was the first time I came across all the pretty chords you can make from leaving a couple of strings open while moving other simple two- or three-note shapes around. His song Revelation is one of the most beautifully written and articulate guitar songs I’ve heard, with the best tone!

“What I found different in Joe’s playing is his ability to craft simple and catchy melodies and phrase them so perfectly that he doesn’t have to rely on (but can still bust out) flashy passages and cool tricks to keep the instrumental song format interesting. I hope we get to jam some day!”