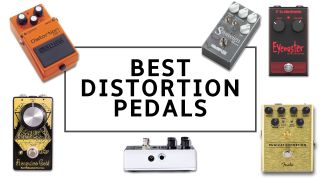 Distortion? C’mon, we all want it and many players just can’t live without it. In this golden age of stompboxes - with all kinds of small-scale boutique FX manufacturers trading blows with industry titans such as MXR, TC Electronic and Boss - there’s never been a better time to find the best distortion pedal for turning your pristine cleans into dirt.

Here we have some hardy perennials and some ubiquitous picks from the big players, but then you’ve also got an oddball gain machine from EarthQuaker Devices with one knob and that’s that. Each one is designed to weaponize your guitar tone, so whether you’re looking for the best distortion pedal for metal, rock or beyond, we’ve hunted down top options - and the best prices - for you.

What is the best distortion pedal?

Fender's Pugilist Distortion is a hugely versatile dirtbox thanks to its dual distortion circuits, which allow you to blend two channels for colossal high-gain tones with enhanced clarity - similar to playing through separate amps at once. As a result, it's one of our absolute favorites.

Alternatively, with all sorts of flavors of gain at your fingertips, with the Wampler Sovereign Distortion on your ‘board you could lose days (weeks) just dialling in various tones, each bathed in harmonic-rich distortion and crunch. It’ll do metal nicely, with tight low-end, but the mid-contour can give your chords all the punch of a young Mike Tyson too.

So, let's talk about what we mean by distortion and how this might affect your hunt for the best distortion pedal. As with anything with an aesthetic purpose, gear, and how it sounds, is subjective. There are no rules so long as the tone speaks to you.

This list focuses on distortion pedals but naturally there’s some overlap between distortion, overdrive and fuzz. All dirty up your tone. But where overdrive doesn’t change the fundamental character of your guitar’s signal, distortion is more aggressive. It clips your signal harder. Fuzz clips it harder still, so you really lose definition. Distortion pedals are best applied to clean tones. Just stomp on the switch, and your metal/punk/hard rock dreams await. With that in mind, let’s talk about what you might be looking for...

Which distortion pedal is right for me?

In the world of heavy metal, distortion is the most-prized raw material, and the evolution of metal and its subgenres through the ages has seen the black t-shirt dollar buttressing the economy for high-gain pedals. For some metal players, a pedal that can deliver thick, saturated distortion, often with a tight compression to it, and definitely some rich harmonics, is essential.

If you are playing towards metal’s extremes, you’ll want a whole heap of distortion. Some scenes, such as the early ‘90s Stockholm death metal scene, coalesced around a distortion pedal, the Boss HM-2; they dimed everything and it sounded horrible but brilliant.

As a rule of thumb, however, it’s always good to use just enough gain to get the job done, and not to use it as a crutch. Features that can enhance a distortion pedal include its EQ, which lets you shape your tone, and imaginative switching options such as selectable clipping modes, which let you choose between different voices of distortion. A little versatility goes a long way, even when melting faces.

£75
View at Bax-shop UK
£82
View at Amazon
See all prices (3 found)
Sounds excellent, tweak-able
It’s a steal at the price
High-gain outshines the crunch
Blend might cause confusion at first

Fender have stacked the Pugilist with all the gain you need, and even if it takes a bit of time to dial in what you need and negotiate the two gain channels via the blend, there’s so much joy to be had.

Yes, it can function as an overdrive, but we’re on the hunt for the best distortion pedals, and the Pugilist understands this, with oodles of gain that can be shaped to react to your pickups.

Mode A is more overdrive/crunch; Mode B saturates the tone for a more modern metal tone, while the bass boost is excellent for fattening up single coil tones.

One of the best distortion pedals around right now

Brian Wampler has packed a heap of features into a small enclosure. The Sovereign could probably fight in the overdrive category but has so much beef in its gain structure that goes way beyond.

The Sovereign’s controls have changed name through the years – from “mid behaviour” to “mid contour” but their mastery over the pedal’s midrange and highs is ever reliable. The pedal’s soul lies in that mid contour.

The even/bright switch lets you toggle between more of a mids-heavy sound and top-heavy treble, while the standard/boost chooses between responsive overdriven tones and more gnarly levels of gain.

An analog, affordable, classic from MXR

Like the Sovereign, the M75 has a default voice that speaks in British EL34 tube crunch. Keep everything at noon to maintain that sort of equilibrium, but if you’re chasing heaps of ugly-delicious metal gain, roll it forward to 2 o’clock onwards.

The three-band EQ is everything in changing the character of the M75’s gain. Take out some of those mids for late ’80s Metallica scooped crunch, boost them for that ‘70s vibe.

When it comes to the best distortion pedals, the M75 is a no-brainer that takes seconds to find the tone you want – an indestructible little powerhouse of versatile analog distortion.

This legendary stompbox is still a filthy animal

Like the DS-1, the ProCat RAT is the stuff of legend, favored by James Hetfield, Thom Yorke, Dave Grohl… It has similarly been modded a thousand times. This Pack Rat model from JHS pedals upgrades the pedal and installs a three-way clipping selector for vintage, open boost and turbo RAT modes.

The character of the old LMN308 is here, but under the hood the components have been upgraded. The cheapo capacitors are gone, their replacements made from metal film and tantalum. There’s less noise. But let’s not kid ourselves, you can’t tame a RAT. Pure grind, rich and fizzing distortion awaits!

The original weapon of mass distortion

The Boss DS-1’s set-up is simple: level, tone and distortion, with a rubber-topped foot-pedal to switch it on and off. The pedal is happy adding a little crunch, some extra oomph, but it keeps the integrity of your guitar tone steady when dimed.

There’s plenty of versatility. The DS-1’s tone knob really can tweak your highs, perfect for pinch harmonics. Dial it back to thicken up you rhythm tone or to fatten up single coil pickups.

All this tone for under 50 bucks, what’s not to like? Just don’t underrate it just because it’s cheap and pre-dates the Sony Walkman.

Metallica’s flamboyant lead guitarist knows his way around a distorted metal tone and the Dark Blood is one of the best distortion pedals thanks to a hefty tone modeled in the high-gain American tube amp style.

The gain is tight and thick, with plenty of bass response courtesy of the appropriately named “doom” control, which intuitively shapes your low-end.

You can find some really devastating rhythm tones setting the hi/lo switch to lo and tweaking said “doom” setting, but an onboard noise suppressor keeps things sane and there are plenty of sparkling highs to be dialled in on what is a great all-rounder for metal.

The Acapulco Gold is dominated by giant output volume knob and its brief is devastatingly simple: to bring the power and tone of a Sunn Model T amp and house it inside a small pedal.

And it works: at low volumes, say, 9 o’clock on the dial, this works as a neat little overdrive, but keep turning it clockwise and the gain – and the volume – keeps coming. The final destination is a thick, fat and open distortion, with a little fuzz overtones, that makes for amazing ‘70s metal tones.

Adjust your guitar’s tone knob to tease different voicings from the pedal. And wear earplugs.

Another small enclosure pedal of simple design housing an enormous and classic metal distortion tone: it must be a Boss? No, but the Eyemaster, named after the Entombed song, is unashamedly channeling the dimed Boss HM-1 Heavy Metal with equally dimed Peavey Bandit for that classic Swedish death metal sound.

Designed and built in Denmark, this pedal is indestructible, but it comes with a three-year warranty just in case.

Push it all the way for death metal nastiness, dark, raw fuzz energy. There’s just gain and level to play with, but relax, TC Electronic fixed the tone. They know why you’re here; you took the left hand path.

The Iron Horse V2 sees the unit updated with a more dynamic tone control and a new level control that makes it easier to dial in unity gain (i.e. when the pedal’s output level is the same as when it isn’t in the signal chain). The distortion circuit has been tweaked too for more subtle low-gain tones.

Key features include the three-way toggle switch that selects between clipping diodes letting you choose from slightly compressed to more compressed and totally open distorted tones.

The enclosure is finished with some neat artwork from illustrator Adam Forster. We’d love to see a craft beer tie-in.

The Herbert is not a distortion pedal in the purest since but it can sure be used as such. Taking the city-levelling tone of the Diezel’s 180-watt lead head and putting it on the floor, this is a sure-fire way of adding high-gain filth to your signal.

This stomp-box ain’t cheap but the amp it takes its preamp circuitry from isn’t either, and featuring the same dynamic EQ options as its namesake, the Herbert has incredible distortion on-tap.

Outputs let you send to a clean amp or alternatively through a power amp or effects loop.

About the author
Jonathan Horsley has been writing about guitars since 2005 and is a regular contributor to Total Guitar and MusicRadar.