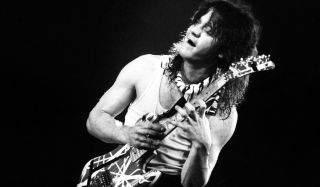 From the GW archive: This feature originally appeared in the December 1996 issue of Guitar World.

King Edward weighs in on two decades’ worth of Van Halen classics!

“I like the way ‘Eruption’ sounds. I’d never heard a guitar sound like that before—like some classical instrument.

“The story behind ‘Eruption’ is strange. It wasn’t even supposed to be on Van Halen.

"While we were recording the album, I showed up at the studio early one day and started to warm up because I had a gig on the weekend and I wanted to practice my solo guitar spot. Our producer, Ted Templeman, happened to walk by and he asked, 'What’s that? Let’s put it on tape!'

"I played it two or three times for the record, and we kept the one that seemed to flow. Ted and Donn [Landee, engineer] liked it, and everyone else agreed that we should throw it on. I didn’t even play it right. There’s a mistake at the top end of it. Whenever I hear it, I always think, Man, I could have played that better.

“For the tail end, I used a Univox echo chamber. It had a miniature 8-track cassette in it, and the way it would adjust the rate of repeat was by the speed of the motor, and not by tape heads. So if you recorded something on the tape, the faster you played the motor back, the faster it would repeat, and vice versa. I liked some of the noises I got out of it, but its motor would always burn out.

“That first album was recorded, mixed and mastered for only $46,000, which was like an all-time low in the record industry. People couldn’t believe it, because the average cost of producing an album at that time was around $150,000 or $200,000. Back then, bands like Fleetwood Mac and Boston were spending something like three years on album, so you can just imagine the cost.

“ ‘Eruption,’ like most of the other songs on the first album, was performed pretty much live. We had been in the studio for the first time ever about a year earlier with Gene Simmons of Kiss, and I quickly learned that I didn’t like overdubbing.

"Simmons produced a three-song demo for us that consisted of ‘Runnin’ with the Devil,’ ‘House of Pain’ and a song called ‘Babe, Don’t Leave Me Alone.’ Gene said, ‘Here’s what you do in the studio—you play your rhythm parts on one track, and your solo parts on another.’

“I remember feeling very uncomfortable with separating my lead and fill parts from my rhythm parts. Onstage, I’d gotten used to doing both simultaneously. I’d just noodle in between chord lines. Because it was my first time in a recording studio, it didn’t occur to me to say, ‘Can’t I play just the way I play live?’

“The demo didn’t work out, anyway. When we finished recording with Gene, we met with Kiss’ manager, Bill Aucoin. When we went to his office he was getting a shoeshine and said, “I don’t see any commercial potential. Besides that, I’ve got my hands full because I just signed a band called Piper [featuring a then-unknown Billy Squier].

"It was really depressing—we were totally bummed. Gene gave us a couple hundred bucks to make our way home. We just kept playing the Whisky and the Starwood in Los Angeles, and about a year later Warner Bros. came down and eventually signed us.”

“ ‘Ain’t Talkin’ ’Bout Love’ was originally supposed to be a punk rock parody. It was a stupid thing to us, just two chords. It didn’t end up sounding punk, but that was the intention.

I doubled the solo section with an electric sitar. It could have been a Coral, but it looked real cheap. It looked like a Danelectro. I never really knew it was an electric sitar, because it didn’t sound like one. It just sounded like a buzzy-fretted guitar. That thing was real bizarre.”

“I had the basic riff and I played it for the guys before we went into the studio, and they didn’t like it. But then I played it for Ted and he really dug it, so we worked on it and put it together in the studio.

"The song was originally a little different, but we cut the fat off and said, ‘Let’s call it, “Dance the Night Away.” ’ I know it’s not a very original title, but we wanted to cash in on the dance craze that was happening at that time.

“The main thing I remember about the second album was that I was feeling a lot of pressure. We were in England touring in support of the first album, and for the first time in my life I called a meeting and said, ‘Goddammit, we have another album to do. Let’s start getting together after shows or whenever we have time on the road and I’ll show you what I’ve got.’

"I was really starting to worry. We weren’t really working on any new material, and I was afraid if we didn’t have enough strong songs our second album would flop.

“We recorded Van Halen II the same way we recorded the first one. We just set everything up in a big room and recorded. I was really happy with the way it turned out. It sounds like Van Halen, but fuller.”

“And the Cradle Will Rock”
Women and Children First (1980)

“Al [Alex Van Halen, drums] and I jammed on the basic riff for ‘And the Cradle Will Rock’ two hours a day for two straight weeks. [laughs] We didn’t really know what to do with it, but we were having fun because it just sounded so wicked.

"Then, out of nowhere, the chorus came to us and it was finished. Sometimes you really have to work for inspiration. But ultimately, it’s not really work because my brother and I genuinely love to jam.

“The solo on that song is unusual. I do one short lick that’s very spontaneous. It came out because I had been listening to Allan Holdsworth, who I think is the baddest. This was a first take—a bunch of songs on that album were first takes.

“That was also the first time I played keyboards in the studio. A lot of people don’t know that because it doesn’t really sound like a keyboard. I had an old Wurlitzer electric piano and I pumped it through my Marshalls. I just pounded on the lower registers and put it through an MXR flanger to get that weird sound.

"Ted said, ‘Wow! What the hell is that?’ [laughs] ‘Oh, nothing, just me, screwing around.’ So we recorded it. That was my first encounter with the band not wanting me to play keyboards—when we did the song live, Mike played it. They didn’t want a guitar hero playing keyboards onstage.

“I thought Women and Children First would strike people as adventurous because of songs like this and ‘Could This Be Magic’ and ‘In a Simple Rhyme.’ Everybody says Fair Warning was a weird album, but I think this one is weirder. Maybe Fair Warning felt that way because the album cover was so bizarre. I think the music on it is actually very straightforward.”

“I love that song. It’s rare that I can listen back to my own playing and get goose bumps, but that’s one of them.

Fair Warning is kind of a dark album. We started doing things my way, and we all kind of butted heads—me versus them. I remember sneaking down in the studio around four o’clock in the morning with Donn and re-recording things the way I wanted them to be.

The next day, they walked in and said, ‘Hey, that’s great! When did you do that?’ It was kind of a cheap thing to do, but I had to do something to get what I wanted.”

“We recorded ‘Jump’ live in the studio with me playing keyboards, and then I put the guitar on later. I used an OBX-A keyboard, which they stopped making. I think we just recorded one take. Actually, the tape ran out at the very end, just in time. When Donn mixed it, he had to fade it just right; otherwise, he would have run out of tape.

“The guitar solo was punched in, I’ll admit it. I’m not proud. You can hear that there are two distinct parts to that solo. I can’t even remember what I played originally. All I remember is the recorded, pieced-together version that everybody knows.

“1984, in a way, was phase one of Donn and Ed. He and I were very involved in this record. We almost took control, to a point, because it was done in my studio and we knew what we wanted. We weren’t about to let the album be puked out, especially since it was done in my own studio. I think the whole album sounds the best. I like it all.”

“5150 was a very inspired record. The tunes are really fresh. There’s a lot of soul there. ‘Why Can’t This Be Love’ sounds so elaborate because of the instrumentation. I used the arpeggiator in the OB-8, so everyone had to play that. That’s why it has kind of a uniform effect. The song is more pop-popular, but I don’t see what’s wrong with that. I would love to have written a Christmas carol.

“Sammy Hagar’s work on this album is like nothing he’d ever done. I think people were afraid that Van Halen would start sounding like one of Sammy’s solo albums. But I knew it wouldn’t happen because I’d be writing the music, and my music doesn’t sound like Sammy Hagar music.”

“OU812 was a lot easier to make. That’s not to say that 5150 was difficult, but Sammy and I were just feeling each other out. We were more comfortable and relaxed. We opened the doors and it all came out. It’s more mature, too. When we recorded ‘When It’s Love,’ I was so focused.”

“When I came up with ‘Poundcake,’ it didn’t really excite anyone until Andy [Johns, producer] suggested I use some electric 12-strings to flesh out the rhythm tracks. It turned out to be just the thing the song needed.

"All of a sudden, the lyrics, the title and everything came into sharp focus. What you hear are two electric 12-strings doubled beneath my usual dirty guitar. It’s an odd sound. It wasn’t really planned.

“The solo goes four bars, another four bars, then two bars. Al kept insisting that it wasn’t finished. He likes to count, and I never do. I’m strictly feel. I’m always screwing around with time, because I never count.”

“The only reason we gave Pepsi the music was because they were going to use the song anyway. They would have just recut it with studio musicians, like they do for some TV movies because they can’t use the original.

"If they use the original recording, they’ve got to pay, but if they don’t, all they do is give credit to the artist and then pay the studio cats.