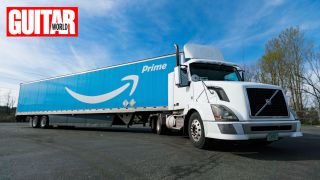 Can you believe that Amazon Prime Day 2019 has been and gone? The 48-hour deals bonanza promised thousands of bargains on a huge range of products from Amazon between July 15 and 16, and from a guitar perspective it didn't disappoint.

We kept a keen eye on the best guitar deals throughout the event and many of them proved to be a huge hit with Guitar World readers. Particular favorites included the massive 30% discount being offered on 106 D'Angelico guitar models, the awesome Fender PM-TE travel acoustic being dropped to $369 and a huge range of iPads with big money off.

Amazon Prime Day 2020 is set to be even bigger. As always, we'll be scouring the web to bring you the very best deals on guitar gear. Stay tuned!

In the meantime, take a look below to see what you missed.

The 17 best deals for guitarists during Amazon Prime Day 2019

Save 30% off 106 D'Angelico electric and acoustic guitars
Was this the best Amazon Prime Day deal this year? D'angelico was offering massive discounts off a colossal range of electric, acoustic and bass guitars!View Deal

Supro Jamesport electric guitar: was $899, now $519
This retro-vibed single-pickup number is one of the highlights of Supro’s mammoth guitar range, boasting a Gold Foil designed to capture those classic blues-rock vibes.View Deal

Fender PM-TE travel acoustic guitar. Was $699, now $369
An almighty 47% discount made this one of the very best acoustic guitar deals this year. Fender's top-spec travel guitar boasts a solid Sitka spruce top and solid mahogany back and sides, plus a Fender/Fishman-designed preamp - and hardcase!View Deal

Line 6 Firehawk 1500 stereo guitar combo amp
Down from $999 to $799 at Musician's Friend
This six-speaker stereo amp is designed to perfectly replicate its vast array of onboard effects, which can be controlled via Bluetooth. And at $799 on Prime Day, it made for a nicely priced one-stop guitar tone shop.View Deal

Egnater Tweaker 112 15W tube guitar combo
Just $499 at Musician’s Friend
One of the most versatile 1x12 tube combos on the market, the Tweaker boasts five toggle switches to change the amp’s character, spanning sparkly cleans to high-gain rock. On Prime Day it was available with $100 off!View Deal

Catalinbread NiCompressor: was $249, now $209 at Zzounds
The NiCompressor’s tone-shaping capabilities are what looks to set it apart from other compressor pedals: bass and treble controls are on hand for tonal fattening, as is a gain control to add grit.View Deal

Learn to play with the Jamstik +. Was $299.99, now $199.02
The Jamstik+ is a great entry point to learning the guitar. It feels great to play and connects via Bluetooth to a huge selection of fantastic tutorials and apps.
View Deal

D'Addario NS Micro Clip-On Tuner. Was $17.93, now $15.65
You'll never go out of tune with this clipped to your guitar or bass. It's easy to use, displays tuning information clearly and can be mounted discretely on the rear of your headstock.View Deal

Ernie Ball Slinky Nickel Wound (3 pack). 62% discount
You can never have too many sets of strings, and Prime Day was the time to stock up, with a whopping 62% off a three-pack of Ernie Ball Slinky strings.View Deal

MEE audio M6 PRO in-ear monitors Was $49.99. Now $36.99
From the studio to the stage, you'll be able to hear your playing with greater clarity and richer audio with the MEE Audio M6 PROs. This Prime Day deal was hugely popular.
View Deal

Marshall Monitor Headphones: was $249, now $129.99
Yes, they're bluetooth, and yes, they'll give you 30 hours of playtime before you need to recharge, but the main reason to pick these up on Prime Day was because you'd look like you have a couple of Marshall stacks clamped to your skull, and that's priceless.View Deal

Marshall Stanmore Wireless Speaker: , now $319.99
This portable Bluetooth speaker delivers over 20 hours of hard rockin' playtime per charge. It's durable and water-resistant too, so you can take it anywhere.View Deal

GoPro HERO 7 Black action cam. Was $399.99, now $343.00
You could have saved $57 on the king of action cameras on Prime Day and used it to film your band's live performances, stream your own playing directly to Facebook Live, or record your practice!View Deal