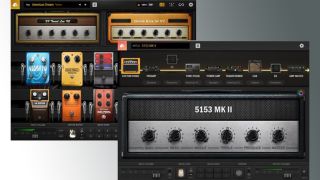 Black Friday 2019 has been and gone, but there are still thousands of incredible deals to be had at your favorite music retailers around the web.

Over at Sweetwater, you can get the Positive Grid BIAS Elite Combo Amp and FX Modeling Plug-in for only $159. That’s a crazy $240 price drop or 60% off!

With all these Black Friday and Cyber Monday guitar amp deals around, why not simplify the whole thing and get one of the leading amplifier and effects modelers out there right now?

With BIAS FX 2 Elite, you get 100 amplifiers, 100 effects, 18 rack processors, 18 modeled guitars and tons more. Now if that isn’t the best bang for your buck this Black Friday we don’t know what is.

Also included are looper/recorder and advanced MIDI/automation functionalities all packed into a simple and easy to follow user interface.

With BIAS Amp 2 Elite, you get incredibly accurate, thorough and versatile amp modeling software, genuine speaker IRs from Celestion - one of the industry’s leading manufacturers of loudspeakers, a speaker cabinet module with open and closed-back cab emulations, multiple mic mixing on the same cab and loads more - again built into a satisfyingly simple user interface.

For more information on this incredible deal, head over to Sweetwater.

Waves has some killer plugin deals, too…

Get Waves' Renaissance Axx Plugin for $29.99
Engineered for guitars, the R-Axx is an all-in-one dynamics processor that delivers mix-ready results in seconds. Get it now for an astonishingly low price.View Deal

Get Waves' CLA Guitars Plugin for $29.99
This all-in-one multi-effect guitar plugin - developed in collaboration with Grammy-winning engineer Chris Lord-Alge - can give you professional-sounding tone instantly. Grab it now at a ridiculous discount.View Deal

Get Waves' PRS Supermodels Plugin for $39.99
Created in collaboration with Paul Reed Smith himself, the Waves PRS SuperModels plugin models three high-end PRS amps - the Archon, the Dallas and the Blue Sierra/V9. Act quickly and get the set for just $40.View Deal

Get Waves' Eddie Kramer Guitar Channel for $29.99
Developed in collaboration with legendary producer and engineer Eddie Kramer, this plugin brings the best in '60s and '70s classic rock tone to your fingertips. Get it now at a 70% discount.View Deal

Get Waves' GTR Solo plugin for $14.99
This plugin features models of amps by the likes of Fender, Vox, Marshall and more, plus distortion, modulation and ambient effects. At $15, it's an absolute steal.View Deal