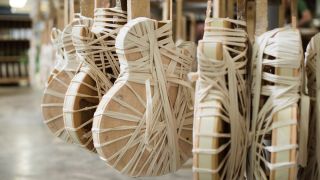 Gibson made headlines earlier this year with the launch of Gibson TV, the iconic American guitar builder’s all-original, worldwide online network. It's already proven a huge success: since its launch on January 7, Gibson TV has acquired 50,600 new subscribers, 5.5 million new views and 526,500 hours of viewing. All Gibson TV original shows will be streamed for free via Gibson.com - you can subscribe to Gibson TV and watch on YouTube.

“Most guitar content is focused on specs and features only. At Gibson TV, we are far more interested in the stories these guitars have to tell,” says Mark Agnesi, Producer, Gibson TV and Director of Brand Experience, Gibson.

“What is the history? How was it made? Where was it sold? Who are the people that buy and collect them? How did they help create the music which inspires us all? Those stories are far more compelling than the fingerboard radius or the type of magnets in the pickups.”

“As we were developing the framework for Gibson TV, we wanted to produce shows that allow our artists to tell their stories and offer original programming that you can’t find anywhere else,” adds Todd Harapiak, Producer, Gibson TV.

“Viewers can watch first-hand how our guitars are made in ‘The Process’, dig through a guitar collection with Paul McCartney’s guitarist Brian Ray in ‘The Collection’  and spend an hour with Tony Iommi talking about his life on ‘Icons’ and so much more.”

Gibson TV has been recognized by the 41st Annual Telly Awards, winning the 2020 Silver trophy for “Best Online Webseries: Documentary” for “The Process”, a documentary series that takes an in-depth look at how guitars are made, with behind-the-scenes footage of the Gibson USA Factory in Nashville, TN, and interviews with the luthiers who hand-craft the instruments. All 12 episodes of “The Process” are streaming now.

“The producers Todd Harapiak and Mark Agnesi had a vision to show the entire process of guitar creation direct from our talented artisans at Gibson USA factory in Nashville. The cinematic show has captivated a worldwide audience reaching far beyond guitar fans; I am proud of what they’ve accomplished in such a short period of time.”