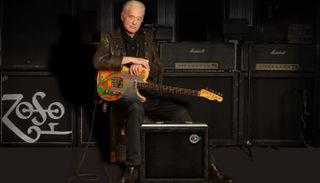 NAMM 2020: Led Zeppelin fans rejoice! After electrifying the 2019 NAMM show with the announcement of its limited-edition Jimmy Page signature amplifier, Sundragon Amps has announced that the amp will now have a Standard counterpart.

The Sundragon Standard was designed as a faithful recreation of Page’s original 1959 Supro Coronado, which was responsible for the bulk of his tones on Led Zeppelin's legendary self-titled debut album. The Surpro was also used on Page’s other early recordings, including Joe Cocker’s With a Little Help from My Friends.

The new model will include most features from last year’s limited-edition version, on which the rock icon worked closely with Mitch Colby and Perry Margouleff to match the classic sound of that famous Supro.

Hand-built, with point-to-point wiring exactly like the original, here’s an amp that certainly won’t be suffering any communication breakdowns, no matter what you throw at it.

The Standard Sundragon Jimmy Page amplifier will be available starting in March, directly from the manufacturer, for $3,875. Head over to Sundragon for more info.