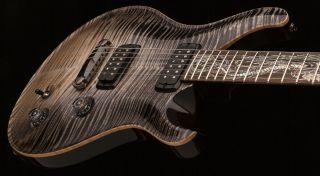 NAMM 2020: With six new SE models, Mark Holcomb and Dustie Waring signature guitars and the incredibly impressive-looking S2 McCarty series, PRS has had one of the best NAMM run-ups in the industry.

Not to be outdone though, today the company unveiled what is easily its most stunning offering in recent memory, the Private Stock Dragon electric guitar.

The ninth guitar in PRS' long-running Dragon series, it's a truly ornate - and slightly intimidating, to be honest - celebration of the company's 35th anniversary.

This literal beast of an instrument is based on the company's McCarty model, and features a gorgeous dragon inlay that was designed by Jeff Easley, a fantasy artist whose work is well-known for gracing the covers of a number of Dungeons & Dragons rulebooks.

Elsewhere, the guitar features a curly maple top, an African ribbon mahogany back, a PRS Stoptail bridge and a chaltecoco Pattern neck with a 25” scale length and 22-fret ziricote fingerboard.

In the sonic department, there are TCI model pickups controlled by a volume knob, a push/pull tone control and a 3-way toggle switch. Phase II locking tuners and smoked black hardware also come standard on the guitar.

Only 135 examples of the PRS Private Stock 35th Anniversary Dragon guitar - which is shipping between February and June 2020 - will be produced. With that in mind, we can't imagine this thing will come in at anything less than a 'maybe we should sell the car' price.

Do be sure to keep an eye on PRS though, for more updates.