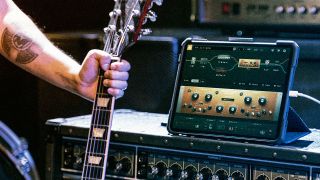 Positive Grid released BIAS FX 2 last year, and at the time we reported that the software was “so good you may never want to go back to playing a 'real world' amp or pedalboard again.”

Now, Positive Grid has announced BIAS FX 2 Mobile for iOS, which transforms an iPhone or iPad into the ultimate all-in-one guitar amp and effects processor.

The app, powered by a re-engineered, high-definition BIAS DSP, is available as a free download in the App Store with expansion options that can be unlocked.

Like the BIAS FX 2 software, the mobile version includes Positive Grid’s Guitar Match technology, which adds virtual guitar models to the already comprehensive gear rigs. Players can transform their guitar sound into “a classic American guitar, a vintage LP and an array of highly-coveted modern and iconic guitar models.”

There’s also a LiveView function, which allows players to switch up a rig instantly with zero latency via a single tap, as well as the ability to load custom cab IR files and to load gear from BIAS AMP 2 within the app.

Additionally, users can connect to Positive Grid’s ToneCloud and download thousands of custom tones created by artists, producers, and recording engineers, as well as upload their own custom guitar rigs. Nine expansion packs are also available via in-app purchase.

The BIAS FX 2 Mobile app supports AudioBus, GarageBand and other IAA host applications and can be downloaded for free in the Apple App store. In-app purchases start from $15.99.