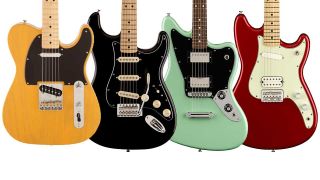 At Guitar World, in the build up to Black Friday and Cyber Monday and throughout the Holiday season, we'll be bringing you the best deals on guitar gear of all kinds.

Fender’s Special Edition Deluxe and Standard models have received solid, holiday-season price cuts across the board.

Prices now go as low as $399 for the Duo-Sonic HS, plus there’s also $100 off the Limited Edition American Professional Offset Telecaster, and $200 off the Classic ’69 Blue Flower Telecaster.

Save $100 on Eight Fender Special Edition Guitars and Basses.View Deal