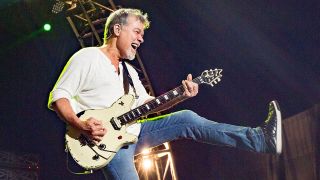 Asking a stranger to take your photo is a fairly common occurrence. But when said stranger is Eddie Van Halen and the subject has absolutely no idea… well, that’s a pretty unusual scenario, especially at a rock gig.

Yet that’s exactly what happened when one fan handed his phone to the electric guitar legend at last night’s Tool show in Los Angeles.

The unlikely scenario was shared by Eddie’s son, Wolfgang, on Twitter, who named it the highlight of that evening’s concert.

“A guy asked my dad if he could take a picture of him with the stage behind him, having no idea who he just asked, and that was my favorite moment from the Tool show last night,” he said.

A guy asked my dad if he could take a picture of him with the stage behind him, having no idea who he just asked, and that was my favorite moment from the @Tool show last night. pic.twitter.com/tA1lywM0yfOctober 22, 2019

In addition to that utterly priceless encounter, the show gives us an encouraging glimpse of EVH out and about amidst reports surrounding his returning throat cancer treatment, which is rumored to be the reason David Lee Roth has declared Van Halen “finished”.

Tool guitarist Adam Jones must have also been thrilled to note EVH’s attendance at the show, being a huge Van Halen fan himself - and as it turned out, he even met the man himself after the gig.

“I’m not Eddie Van Halen, but I try to figure out other things I can do that are mine,” Jones told GW in his mammoth cover feature.

“I love Eddie and I wish I could play like him, but it’s kind of been done and that’s also kind of the point!”

On a side note, we’re pleased to see Eddie’s attendance at a show from a band formed post-1986, the year he claims he stopped buying - or even listening to - albums.