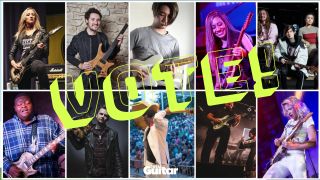 Total Guitar magazine are working on a forthcoming special issue and they need your help. They want to know who you think are the greatest guitarists of all time.

Today we want to know who you think are the greatest players in the world right now.

(Can't see some names you were expecting? Some contemporary players have already been covered in our genre polls, so be sure to vote in all the polls.)

We’ve listed over 20 hot young players to get you started. Every vote counts – and you can vote for as many of the guitarists below as you like. You might have your own favourite that isn’t on there – simply write your suggestion at the bottom of the poll.  The winners will be the ones with the most votes, simple as that.

We'll be announcing the results in the coming weeks – and Total Guitar will be telling you everything you need to know, including how to play just like them – so make sure to check back to see how your favourites fared.