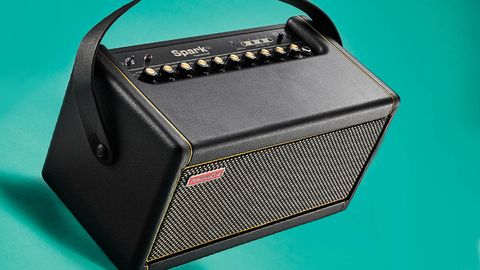 Stacked with all the modeling, effects and connectivity we'd expect from a state-of-the-art desktop amp, the Spark takes things further with its Smart Jam and Auto Chords features. It's incredible.

In the worlds of smartphones and video games, 25,000 isn’t a big number when it comes to preorders. But in the world of guitar amps, it is huge. So how did the Positive Grid Spark manage to convince so many people to lay their money down without even trying it?

Firstly, the tone engine behind this amp is a known quantity to anyone who has tried the company’s BIAS modelling software or heads. And it’s very good. That is really the main event, as we’ll discuss in more detail.

But we think there’s more to it than that; the desktop amp market that Spark is gunning for the hearts of recognises one central truth about guitar players; most of us play at home.

Then, there’s the price – even at full price it hits an ‘I could justify this’ sweet spot for buyers. But then there’s another factor; the Spark isn’t just an amp.

Yes, you’ve heard it before – amp integration blah blah, bluetooth audio streaming yada yada... Yes, it does all that, but it can also listen to a song of your choosing from Spotify, Apple Music or YouTube and transpose its chords for you to play along with.

Fancy a jam? Pick a tempo, play a riff or a chord progression, choose the genre you want and it’ll play you a whole backing track to jam over. Surely a cynic would be raising an eyebrow by now?

First up, it looks like an amp; while the dimensions are certainly table-friendly, the Spark isn’t trying to look like anything else in an effort to appeal to home gadget fans. But that’s not to say it doesn’t look good; the black and gold, from piping to grill and controls should look reassuring to any guitar player.

The general outer is high quality with a handy leather removable carrying strap. There’s seven channels to choose from; including bass and acoustic. Then, familiar controls with three-band EQ, gain, master and output.

The modulation, delay and reverb controls are a simple but canny inclusion that means you can quickly dial an organic blend of effects in and out to your taste. Indeed, the amp is ready to roll, and rock, as soon as you plug it in – no app setup needed.

You can get a taste of what’s on offer straight away. And it is an addictive recipe – we lingered at this stage for a long time, simply having too much fun playing.

The Spark sounds like the little amp that could; and did. It is 40 watts with a stereo speaker and makes it count for a lot. Yes, you can play at house-friendly volumes or through headphones, but this thing can really sound expansive and loud, combined with modelling that feels like valve response in a practice amp.

Turn it up when you can. Coupling with the Spark app via bluetooth opens up the possibilities.  For your tones, that equates to 30 different amps, five compressor pedal models, nine overdrives, 10 modulation pedals, six delays and nine reverbs.

Make your signal chain and save your choices into one of the seven amp voices across the four preset banks. And that’s going to take a while, not because it’s a difficult process but there’s so many great tonal possibilities here to get carried away with.

In addition to control over your tones, the Spark app offers two key features; Smart Jam and Auto Chords. In addition to a range of backing tracks that can be streamed from YouTube inside the app, the ‘smart’ part generates a backing track based on what you’re playing, detected by your smartphone or tablet’s mic.

A Home For Tone

Getting to grips with the BIAS bonanza

There’s no initial up-selling going on here; with 30 amps included for guitar, bass and acoustic it’s pretty easy to get lost in the Spark’s BIAS engine straight out the box. As usual with modelled amps, there’s a familiar array of classic Orange, Marshall, Fender and Mesa/Boogie. We found ourselves gravitating to the rock versatility of the Plexiglas and JM45, especially when we were playing with the Smart Chords or improvising. High-gainers will find plenty to enjoy here with the Treadplate and 5153 leading the charge. But Positive Grid go further with the Tone Cloud community – users can post their tones for download/uploads via the Spark app. There are 10,000 so far – plenty to keep you inspired.

April will bring more genres in addition to the existing pop and rock genre choices for it so far. While it’s nice to have, we think Auto Chords is a much bigger deal here; it listens to a song you choose within the app and if it doesn’t have the chords for it transcribed in its database, it evaluates the song and transposes the chords in minutes for you to play along.

Yes, it can miss chords from time to time, but is generally accurate and it opens up the Spark for you to learn whatever you choose. Vitally, it makes learning fun. For us, the quality of a piece of gear can be honed to one question; does it make you want to play?

This does, a lot. Believe the hype; the Spark is a fantastic practice and recording amp at a competitive price. It lives up to the term ‘smart amp’. To be honest, we’d recommend the Spark at this price if that’s all it delivered as a combo, but the developing features that encourage solo players to learn songs and stay inspired make this an absolute home run.

The Spark is available direct from Positive Grid.

Blackstar’s 2x10W desktop amp is an overlooked gem with dedicated channels for electric, acoustic and bass, as well as bluetooth playback.