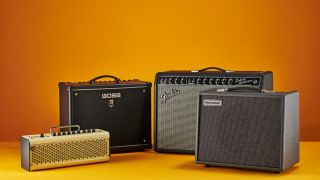 Each of these cutting-edge amplifiers are a Total Guitar Best Buy, but which is right for you? (Image credit: Olly Curtis / Future)

Let’s face it: guitarists love valves. From the minute you first started honking your guitar through a little solid-state practice amp, you’ve dreamed of owning a ‘real’ guitar amp, with glass bottles glowing hot and bursting forth with even harmonic distortion.

Well, that might have been the case for many of us, but in the last decade, modelling and digital technology has continued to improve, to where we are now at a point of difficult debate.

Purists will tell you that there’s no substitute for a valve amp. They’ll probably tell you about their hearing loss and back problems while they do. But, joking aside, the tones produced by digital amps are now so convincingly valve-like that the benefits of lighter units and more manageable perceived volumes, plus a whole range of benefits such as recording, effects and memory banks are all major conveniences to would-be digital converts.

That’s what this month’s test is all about – can we get the kind of guitar tones at home, on stage or in a recording environment that will appease that valve itch? Boss, Blackstar, Fender and Yamaha all seem to think we can, so let’s find out...

Katana? I’ve heard of these before…

Yes, and Boss recently released the MK II versions of its popular modelling amps. This is the smallest of the range. The name of the game here is “more” compared with the original Katanas: twice as many amp models (10 vs five), extra eff ects, and a new ‘power amp input’ for running other eff ects into the power amp stage.

So it does quite a lot, then?

On paper, it’s one of the best-equipped amps on test. The Katana MKII comes with cab-emulated outputs over USB and an analogue output, so if you want to record or send a direct feed to a PA it gives you the sound of a mic’d cab, with three different voicings on offer. The Katana can work as an audio interface over USB for recording; the USB socket doubles as a gateway to Boss’ Tone Central patch resource and Tone Studio editor.

The Katana offers the most variation when it comes to eff ects in this group, with everything from classic Boss chorus to T-Wah (autowah), an octaver, pedal-controlled pitch bend among others. What’s more, you can run up to five effects simultaneously.

Yep. The visuals are a radical departure from the all-black designs we’re used to from Blackstar. They set the Silverline apart from hulking valve heavyweights like the Series One and HT Venue valve amps. We think it looks classy from the off.

Enough about the looks: what’s under the hood?

The Silverline range features five different models. The Standard we have here is a 20-watt, 1x10 combo. Blackstar loves to include patented methods of achieving ‘the sound in your head’, and the Silverline is a continuation of its TVP (True Valve Power) technology. The idea is to bring high-end valve tone to a digital product, centred around two main areas of the amp: the pre-amp voicing, which is switchable from clean to heavy distortion through six selectable voices; and the power amp responses, which off er six different selections based on popular power amp valves.

What else does it do?

There are effects by way of three independent selected engines (Mod, Delay, Reverb), an emulated output/headphone socket, plus a line-in for jamming to music from your phone or other sources.

Well-spotted. While other digital amps in this test are packed with classic amp models, the Fender Tone Master has its sights set squarely on one objective: to faithfully recreate one of the most iconic amps of all time in a digital format. It looks just like its valve parent on first sight, is roughly half the weight of a valve Deluxe and features no screens, menus or indicator lights.

So is it quite limited, then?

It might not have oodles of amps and effects, but the focus here is on nailing the tone and weight of a known quantity. Amp fans know that the Deluxe is famed for its versatility, so as well as those sparkly clean tones, all-important tremolo circuit and reverb effects, it’s possible to get rich-sounding overdrives from the Deluxe too. You have two channels (just like the original); normal and vibrato, both with hi/lo inputs so you can tailor it to the output of your guitar.

How has Fender made the amp so light?

The Tone Master uses a 100-watt digital power amp to recreate the output power and response of the original, which reduces the weight significantly.

This one looks different to the others…

That’s because it is. It’s been a while since Yamaha fi rst released the THR series – marketed as the ‘third amp’. Many guitarists have their main gigging amp and a smaller amp for rehearsals and small venues, but nothing that can sit neatly in the front room. The THR has certainly been popular thanks to its small size, appealing looks and ear-pleasing tones. The MKII version continues on this path.

So it’s not for gigging, then?

Yamaha’s THR Head series is your place to look for fully giggable amps, and the THR II line up is defi nitely more suited to using at home. That said, it does include an emulated output, so on-stage use isn’t out of the question. The 30W model we have here includes wireless functionality for your guitar – a built-in receiver for a Line 6 Relay transmitter (not included), a rechargeable battery that lasts around five hours, and remote app control.

What about the sounds?

Hidden under the five-way Amp selector switch are three variations (Classic, Modern and Boutique), so you get 15 guitar amps in total, ranging from clean and vintage to saturated high-gain.

With so many models and features on offer here, the choice is less about the quality of the sounds and build, and more to do with the application you’ll be using it for. We’ll start by saying that all of these amps sound great, and with the number of tonal variations on offer for most, there’s an almost overwhelming amount of tinkering to be done.

The Blackstar, Yamaha and Boss all offer a wide variety of sounds and effects across the board. We liked the smooth, rich overdrives of the Blackstar as we upped the gain, and the little Yamaha pumps out some beautifully lush reverbs.

Of course, tweaking is optional, and one of the criticisms of digital amps is that they offer so many options that it’s easy to become distracted rather than actually playing! That’s where the Fender Tone Master excels, offering a unique take on digital technology within this group: if you’re a technophobe and the thought of not being able to see what is going on with your tone bothers you, the Fender is a perfect choice. We were taken by its ability to recreate reverb- and trem-drenched cleans with such an ‘organic’ feel, while also offering punchy blues/Americana overdrives.

Blackstar’s Silverline Standard and the Boss Katana are the most closely related in terms of size and features here. Both offer plenty of options, additional connectivity and editing, and it’s the one face-off within the four that comes down to sound.

To our ears, the Katana is voiced brighter than the Silverline Standard, with a marked bass roll-off that is noticeable both ‘in the air’ and through the floor when we plugged into the Boss. That said, the Boss Tone Studio offers cabinet resonance control (instead of a panel knob), so there is plenty of tweaking to the low-end response on offer: you just have to connect to a computer and save it.

We’d suggest hyping the resonance, then using the bass control to remove what you don’t need, to avoid constant computer hook-ups.

Digital amps have come into their own

To anyone still exclusively eyeing up valve amps for their next investment, we say: take a look at these four. They really are all that good. With every one of these lines offering alternative models except the Yamaha (although we’d be surprised if an update to the THR head doesn’t come soon), you’ll be hard-pushed not to find an amp that can be used for your purpose.

The Yamaha’s updated features make it the obvious choice for convenience and speedy practice if you’re not gigging, leaving nothing between you and getting going. Meanwhile, Blackstar’s Silverline is our pick if you’re looking to bridge the gap between using the amp at home for practice or recording as well as on stage.

Fender’s Tone Master is our definite choice for simplicity, plus the authentic tone and feel of the original, and with some additional pedals, it will cover more ground than the indie/blues/classic rock sounds you’d expect.  Finally, the Katana excels – in particular for its diverse range of effects and value for money.

So, valves vs digital? We’re starting to believe it’s irrelevant for many situations: the real verdict is that convenience matched with tone has never been as good as this. Just choose the right weapon for your battle.