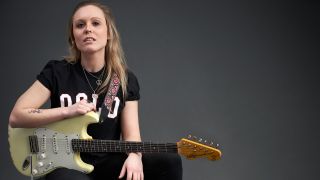 Last year was both a busy and a notable one for Tora Dahle Aagård. She played with Paul Gilbert and Jennifer Batten, did a gig at The Royal Albert Hall, and released her first eponymously titled album.

One reviewer noted her “playful virtuosity” and stage presence, while another applauded her “incredible talent” and dubbed her “the most courageous guitarist I have ever met”.

Hugely popular on social media, her enthusiasm for both music and the guitar is infectious and yet she was a relative latecomer to the instrument...

“When I was 14 years old, I saw School Of Rock with Jack Black,” she enthuses as we settle in the Guitarist studios shortly before the shadow of lockdown. “There were these kids playing instruments and they were so young, but they were so good at it.

"This kid called Zack in the movie played guitar, and he played rock ’n’ roll guitar, so fast. I was like, ‘Well, that’s the coolest thing ever and he is the coolest person ever... I want to be that.’”

As a reaction to watching the movie, Tora formed her first band, and sheer hard work and the refusal to give up has launched her well into public view. But where did it all really begin?

“I come from a very musical family,” she says. “I grew up with music around the house constantly. I just picked up a very bad acoustic guitar and started playing and I have played ever since, because I wanted to become good at it. I’m still working on that... that’s the short story.

"I’m not like your typical guitar player, because I don’t very often listen to guitar players or guitar music. But if I do, I love to listen to Derek Trucks, John Scofield, John Mayer is great, and Marcus King is amazing.

"But I think if I were to choose my favorite guitar player, I would say Derek Trucks, because I don’t think anyone can play like him. He’s from a different world when he plays.”

When did you start playing in bands?

“I started my band almost the day I started playing guitar. I come from a very small place in Norway, a very small town on the coast. I think maybe like 100 people, 200 people live in my town. I just found the two guys that also played music, started the band and they are still playing with me today.

"We rehearsed in the worst rehearsal space ever and I just booked gigs from when I was 14 until now, when finally someone does it for me. I worked really hard and wanted to play live.”

Did you have a very intense practice routine in those early days?

“I had played guitar for six years before I really started practicing. And I regret that now, because I wish I had started practicing earlier. But when I was 20 years old - I’m 26 now - I realized that being a girl playing blues and rock ’n’ roll guitar, it meant that I had to be very good to be taken seriously and to be respected and to be heard.

"I realized I wasn’t there, because I hadn’t taken my instrument seriously; I couldn’t expect that respect from other people when I was just wasting my time not practicing.

“When I decided that I was going to try to be as good as I can be, every day, I woke up, I plugged in my guitar and I practiced. I think I played whatever I wanted. I don’t practice scales or technique. I just play.

"I record everything I play and listen to it, so I can hear what I did wrong and what I like and what I don’t like. That works for me.”

What’s your approach to songwriting?

“I don’t like to have that many rules. Like, if there are too many chords when I’m writing my vocal part I feel like I have to adapt to the chords, instead of just jamming on an A and finding a groove. I can sing in so many directions over that chord, and play with the rhythm with my voice as well. I can do whatever I want. I can go major, minor, I can go up - all of these things.

"Writing music like that brings out songs I never thought I could write, because I’m so free. It works. A lot of the songs on the next album were written like that.”

Thanks to social media, you’ve become something of a role model now...

“Yes, I feel like I now have a responsibility when I see how many girls, young girls, contact me through social media and say, ‘You are a role model to me. What you do inspires me to do the same.’ But it has to mean something else other than just, ‘Oh, look at me. I’m playing a concert and I’m super-cool.’ You have to have something more than just that.”

How have you gone about keeping a band together through the years?

“Keeping a band alive is not easy. People move and people want to do other things. I remember, when I was like 17 years old, and the band, we were nothing. We were just jamming and having fun.

"But it has just been hard work keeping a band together, making music, and at the same time having fun. Because that’s important.”

Your second EP attracted a lot of attention, didn’t it?

“Yes. We released the EP [Change Of Scenery] in 2016 with five songs. That was supposed to be our last thing we did before we quit, because someone was going to the army, someone was doing this and that, and we were like, ‘We will release five songs and we are out. This is our legacy. You’re welcome.’ Right?

"What happened was after we released that one, people liked it and they played it on the radio. We got great gigs and we played all over Norway, so we couldn’t stop, right? We had to keep going. Now it was fun [to be in a band] again, because people were actually noticing us and liking it. This year we are releasing our third album [as yet untitled]. It’s going to be great.”

What gear are you using at present?

“I have the Vintage [V6] Thomas Blug S-type [electric guitar], which I think is the guitar I have used the most. I also have two Chapman guitars: a Chapman ML1 and a Chapman ML3. They are great, I use them a lot.

"Now I also have a Yamaha Revstar - that’s a beautiful guitar. I think it’s one of the most beautiful guitars I’ve ever seen. It’s kind of sexy, that guitar. I need time to get to know new guitars, you know, become friends with them. We are talking, the Revstar and me. We are getting there. I also have a Fender Custom Shop Strat - very beautiful.

"I have an Epiphone and two acoustic guitars, an Alvarez and a Tanglewood.”

What about amplifiers, pedals and so on?

“I have always used a Fender Hot Rod, but now I’m using a Boss Nextone. I’m getting to know that one. I think it’s a beautiful amp; I have it now at home in my living room, so my neighbors are pissed, but that’s okay.

"You know, it’s the same with amps and guitars - you have to spend time with them and you have to test them on stage before you can say if it’s love or not.

“Pedals? I have so many, because people keep sending me them to try, which is super fun, right? But I’m not a geek. On my pedalboard I have the J Rockett Dude pedal and I mix that with the Xotic BB Preamp boost then you almost get a wah-wah kind of sound, only with distortion. That’s kind of my sound.

"If people like the way my guitar playing sounds then that’s the secret trick. I have a delay, reverb, boost and a tuner, and I’m good.”

How do you see the band developing over the coming years?

You’re at the start of your career. What’s your philosophy on making music?

“For me, music is an escape in many ways. I don’t do yoga or meditation, I don’t work out. I need something to help my brain, you know, take a break from life. We all do that sometimes. For me, to practice and play guitar, that is my meditation. It makes me relax and after six hours in a small room playing guitar on my own I can come out and feel fresh, you know? I’m back. That’s music to me.

"Also, it’s the thing I know how to do. I feel at home when I’m on stage. I feel safe. I’m super-scared at birthday parties, like when you have to sit around a table and talk. But put me on stage in front of hundreds of people...

"I have this watch that measures my pulse and it’s lower on stage than it is at home on the couch. That’s no joke. It’s home and that’s where I want to be. I know this because I’ve been doing it for so many years; it’s not just something I’m saying to sound cool.

"Music is very important for me - to feel that I’m good enough, that I can do something. I can master it, it’s my thing. We all need a thing.”