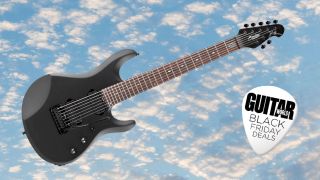 Given that the American-made Music Man electric guitars are generally found in the upper-tier price bracket, the arrival of the first John Petrucci signature under the more affordable Sterling banner back in 2009 was welcome news indeed.

The line has since been expanded to include various models at different price points, including this stealth black JP70 seven-string – which comes loaded with matched high-output ceramic pickups, a recessed Modern Tremolo bridge and locking tuners. And it just got marked down from $549.99 to only $449.99 at Musician’s Friend for Black Friday.

With its basswood body and maple neck, the JP70 based on the considerably more expensive Music Man JP7, giving players a chance to own an instrument with similar features and specs at a fraction of the price.

And while it packs some serious distorted heat in the lower ranges thanks to the additional string, it remains impressively articulate and musical in both higher registers and cleaner settings.

Grab it now over at Musician's Friend.

Sterling by Music Man John Petrucci JP70: only $449.99
Now this really is a dramatic turn of events – a John Petrucci signature seven-string in stealth black for under $500! Astonishing deals like this don’t come every day…View Deal