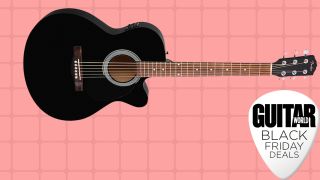 Fender ranked quite highly in our round-ups of both the best <$500 acoustic guitars and best acoustic guitars for beginners, and its cheap, sleek and easy-to-play FA-135CE model could've quite easily also slotted into either one of those lists.

If that sounds like something you'd be in the market for, you'll be happy to know that - for Black Friday - Guitar Center has marked the already-affordable acoustic-electric down $50, bringing its price down to an amazing $149, from its usual $199.

Featuring a Fishman Ion-T preamp with a built-in tuner, the FA-135CE is living proof that you don't have to empty your bank account for a stage-ready acoustic guitar.

A Fender 3+3 headstock, Viking bridge and mahogany neck with dot fingerboard position inlays make this instrument the perfect pick-up-and-play guitar - whether you're just starting out or a seasoned veteran on the instrument.

We've admittedly been bringing you a lot of deals this week, but we certainly haven't seen a Fender this cheap anywhere else!

Get Fender quality at a Squier price with $50 off the FA-135CE
Featuring a Fishman Ion-T preamp with a built-in tuner, the FA-135CE is living proof that you don't have to empty your bank account for a stage-ready acoustic.
View Deal