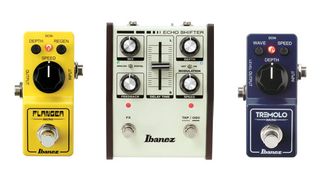 NAMM 2020: Not content with dishing out a wealth of gorgeous AZ and RG electrics, plus a host of revamped acoustics, Ibanez has also dropped a trio of new pedals - four if you count the already-announced reissue of John Frusciante’s favorite wah, the WH10.

This latest batch of releases includes two new mini pedals - the Flanger Mini and Tremolo Mini - plus the return of the Echo Shifter delay.

The Flanger Mini’s yellow finish is an obvious reference to the classic 9 Series FL9, but does away with the delay time control, instead focusing on width (now called depth), speed and regen.

There wasn’t a tremolo pedal in the 9 Series line-up, so it’s not clear whether the Tremolo Mini is based on an existing pedal - potentially the Soundtank Tremolo - or features a new circuit entirely, but it’s packing wave, depth and speed controls, plus a handy internal level trimpot to prevent perceived volume loss with higher depth settings.

Finally, we’re thrilled to see the underrated Echo Shifter return in a new ES3 guise. This latest version of the delay pedal boasts both analog and digital delays (40ms-600ms times for analog, 40ms-1500ms for digital).

Another crucial tweak to the format includes the ability to induce self-oscillation via the tap tempo footswitch - hold it down, and the repeats will take off, with pitch manipulation made easy via the delay time slider.