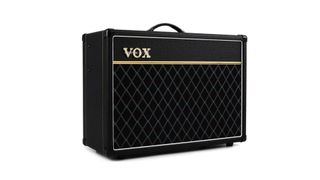 When Vox launched the AC15 - its very first guitar amp - back in 1958, it debuted to massive commercial success, mostly due to its versatility among a wide range of electric guitar players. It gave birth to a new wave of British guitar music, fueling the sound of a host of huge names from The Shadows to The Beatles.

The combo has gone through several iterations since then, all the while retaining the qualities that made it such a knockout. One such version is the Vox AC15 Custom Vintage Black, which is now available at Sweetwater with a massive $200 discount.

The combo's circuitry is based on the legendary Vox sound, equipped with a built-in tremolo, spring reverb and 2-band EQ. It's loaded with JJ Electronic tubes that push 15 watts through a 12" Celestion Creamback speaker, making it a solid performer on stage, while offering a well-rounded playing experience for both home and studio use, too.

With a sleek black-on-black visual aesthetic, the AC15 Custom Vintage Black has the looks to match its unparalleled tonal capabilities.

So act fast if you're looking to secure this iconic British guitar amp for less. For more information, head to Sweetwater.