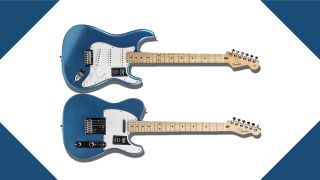 UPDATE: This deal has been hugely popular, so both the Strats and Teles have now sold out. Adorama has loads of great guitar deals elsewhere though. Check out their full range here.

There are deals, and then there are totally unmissable deals. With that in mind we’ve uncovered discounts on a couple of electrics that may be better than anything else you’ll find amongst this year's Black Friday guitar deals.

The Fender Stratocaster and Telecaster are the quintessential electric guitars. Even if you're already the proud owner of one, there’s always room for another in the collection. And if you don’t yet own one, this could be a prime opportunity.

Over at Adorama, these beautiful blue Fender Player electric guitars are being offered at just $479.99 each down from $774.99. That’s a massive $295 or 38% off. You'll need to act fast though; in our experience deals like this don't stick around for long.

Each guitar features an alder body - known for its resonant, bright and balanced tone - and a striking gloss polyester Lake Placid Blue finish.

Fender Limited Edition Player Telecaster: $479.99
Where else can you get a brand new Telecaster for under $500? With Black Friday on the horizon, this could be a sign of great things to come for players on the hunt for a bargain.View Deal