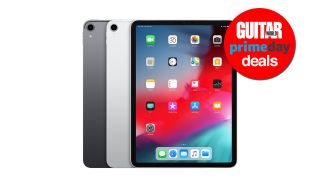 Prime Day guitar deals: Aside from all the fantastic guitar gear deals that have appeared in the first 24-hours of Amazon Prime Day, the event is also throwing up mega deals on  non-music products too - some of the biggest discounts we've uncovered today are on Apple iPads.

A premium tablet like the iPad is a fantastically creative tool for musicians: use it to record music and film gigs, display sheet music, design album artwork or chill with a film before a gig; not to mention how great they are for gaming, productivity and music listening.

Apple iPad Pro - 11-inch, Wi-Fi, 1TB: £1,367
If you can do without cellular connectivity on your new iPad Pro, this could be the 1TB deal that you pull the trigger on. We certainly wouldn't blame you.

Apple iPad Pro - 11-inch, Wi-Fi + Cellular, 64GB: £811
The slightly miserly 64GB of storage might be a bit of a problem for you, but if you can deal with that (or you prefer to stream and keep your files in the cloud, then this could be the tablet for you.
View Deal