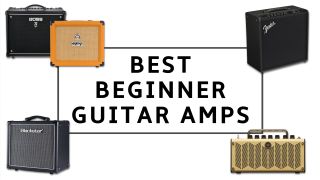 Plugging into one of the best beginner guitar amps is your first step on the road to realizing your dream of becoming a better (and louder) electric guitar player. After all, there are few joys purer or more intense than the meeting of a six string and a guitar amp. It’s almost hard to describe the feeling when you realise that glorious, enormous racket coming out of that box is indeed being created by you.

Don’t get us wrong, the best acoustic guitars are incredible instruments that can transform your guitar playing, but there’s something life-affirming about the fusion of electric guitars and amps.

If you’re new to the world of amplifiers, you’re in for a real treat with our guide to the best beginner guitar amps. After all, you may associate amps, which includes the best amps for metal, with those oversized walls of cabinets you see behind bands at live shows. In reality, beginner amps are no larger than a regular shoe box. True story.

Choosing the best beginner guitar amp means balancing cost, versatility and portability. In the Boss Katana 50 MKII there exists almost the perfect guitar amp for beginners. You gain access to all the different amp voices and effects you could ever need, and the ability to connect it to a computer means you can be recording your guitar playing in no time.

Choosing the best beginner guitar amp for you

When you’re shopping for the best beginner guitar amp, you’re likely to be in one of two situations. Either you’re completely new to guitar, and don’t know where to begin, or you’re looking for something cost-effective, perhaps as a back-up or home practice rig. Either way, there are some great options here.

Assuming you’re new to the world of amplifiers, there are some key factors to consider. First is the amp’s size and power rating, which is measured in watts (W). While you may be tempted to opt for the largest, loudest amp you can afford, it’s often wiser to exercise a degree of realism. More likely, beginner guitarists will benefit from a wide selection of different amp voicings – what the tone ‘sounds’ like – and possibly some effects so you can build up your knowledge of how they can be used to colour your playing.

While more experienced players gravitate towards tube amps as they chase that perfect tone, for a beginner, tube amps could be overkill. They’re also more expensive and often require regular servicing. Instead, we’d recommend a solid-state or digital modelling amp as the best beginner guitar amp for you. They pack in plenty of different amp voices, from clean to blues, yet are affordable and versatile.

That same versatility is what makes the best beginner guitar amps appealing to more experienced guitarists on a budget. Often you can find good interpretations of more sought-after amps at a fraction of the cost, with the sacrifice being the size and power you’d need to play live shows.

So consider the size and loudness you realistically require, and choose something that gives you the flexibility to try out different sounds. Let’s take a look at the best beginner guitar amps now, with top options from the likes of Boss, Yamaha, Fender and Blackstar.

Prime
£249
View at Amazon
£283
View at Bax-shop UK
See all prices (3 found)
Incredible sounds
PC interface
Easy to use
Nothing!

Boss is one of the guitar industry’s best-known brands, largely due to its incredible history in the world of effects pedals. The Boss Katana 50 MKII takes this heritage and translates it into one of the best value beginners’ guitar amps on the planet.

For a shade over $/£200 you get five different amp voicings, along with 60 different effects, so there is something tonally here for anybody. Add extra features like a USB PC interface, so you can record onto your computer, and you have a pretty compelling package.

The best beginner guitar amp in a small package

£56
View at Bax-shop UK
Prime
£59
View at Amazon
Prime
£74.43
View at Amazon
See all prices (4 found)
62 Amazon customer reviews
☆☆☆☆☆
Portable
Bluetooth is reliable
Alternates between sounds
Limited in use outside of practice

The Blackstar Fly 3 Bluetooth is the perfect beginners’ amp for anybody short on space. Weighing in at under 1kg, this tiny amp delivers a surprising amount of volume through its 3-inch speaker, while the two channels ensure you can alternate between a rich clean sound and something a touch hairier. The inclusion of a delay effect will help round out your sound too.

We like the way you can connect two Fly 3 amps in stereo, while adding Bluetooth inside for jamming to backing tracks or music streaming offers an extra element of usefulness.

As perhaps music’s most recognisable guitar brand, it’s reasonable to expect something good from Fender. With the Fender Mustang LT 50, we weren’t disappointed. While this amp is classed as single-channel, in reality packs in 20 different amp voicings for you to choose from, as well as a small selection of good quality effects.

We found its preset ability useful; with so much in the way of choice from various amps and effect voicings, it was nice to be able to store the ones we liked for quick recall later. An excellent addition to our best beginner guitar amps guide.

For smartphone or tablet owners, the IK Multimedia iRig Micro Amp is particularly interesting. This tiny amp connects to your mobile device and, through its Amplitube app, allows you to access loads of different amp voices, cabinets, effects and other tools.

The iRig Micro can be powered by a power supply, or by six AA batteries, making it both portable and versatile which, when it comes to the best beginner guitar amps, is a superb combination of features.

If the promise of multiple amp voicings doesn’t appeal to you, and you just want one solid, high quality sound to work with, then the Blackstar HT-1R may be the best beginner guitar amp for you.

It’s an all-tube amp, meaning you get those glorious tones the professionals rave on about, yet in a package small enough to suit a beginner. What the HT1R lacks in features, it more than makes up for in sound and, as such, is easy for us to recommend to any beginner guitarist.

While Marshall and Fender are arguably the better-known brands, many players gravitate towards British amp giants Orange for their high-gain needs. Put simply, the gain – or distortion – sound produced by an Orange is quite unlike any other. Thick, with oodles of mid-range girth, and a raspy high-end, the sound of an Orange at full throttle is something to behold.

The Orange Crush 20 takes all that expertise and knowledge and packs it into a 20W, beginner-friendly amplifier that’ll serve any aspiring metal player perfectly. Yes, it lacks effects of any kind, but that’s a small price to pay for such a tonally balanced amplifier.

The best beginner guitar amp from a huge guitar name

Not everybody wants a guitar amp to fit the cliché of being a big, black box. The Yamaha THR5 offers the perfect antidote to this, and offers a huge selection of tonal options to boot. Its two small speakers do a great job of providing a stereo sound, while the USB connectivity means you can use it as a recording interface into your computer.

A total of five different amp voices are included, along with a nice sprinkling of effects, making for a small but perfectly formed amp for a beginner guitarist.

It would be remiss of us not to produce a list of best beginners’ amps and not include a Marshall. After much deliberation, we’ve opted for the Marshall Code 25, which is a solid-state/digital hybrid with all manner of amp models and effects included.

What appealed to us about the Code series was the insane amount of amp combinations you can choose from. With 14 preamps, four power amps and eight speaker emulations, there is a tonal combo here for everyone. That’s before you get into the included 24 digital effects, which can even be controlled from your mobile device via Bluetooth.