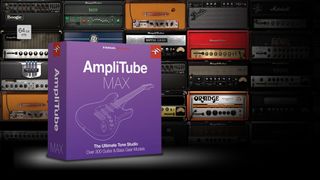 We've seen some spectacular lockdown guitar deals, but Sweetwater may have just upped the ante with this astonishing deal on IK Multimedia's AmpliTube Max, which gives you $250 off the most comprehensive guitar plugin suite known to man.

For just $249 (as opposed to the original price of $499), you can get just about any guitar tone you can imagine, with all the gear found in AmpliTube 4 Deluxe, AmpliTube Fender, AmpliTube Mesa/Boogie, AmpliTube Orange, AmpliTube Ampeg SVX, AmpliTube Jimi Hendrix Anniversary Edition, AmpliTube Slash, and AmpliTube Metal.

Add in IK’s clever Cab Room, an onboard eight-track recorder and unbelievable range of guitar amps and pedals, and you have a one-stop shop for all your guitar recording needs.

Head over to Sweetwater right this very second to secure yourself this insane deal - it's set to end on June 2.

IK Multimedia AmpliTube MAX: $249 at Sweetwater
This comprehensive suite of guitar amps and effects is half-price at Sweetwater, and makes this perhaps the best guitar plugin deal of Black Friday, Cyber Monday and beyond.View Deal