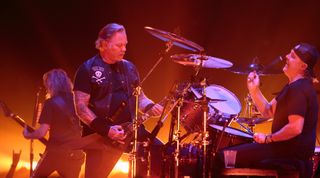 Metallica have announced a special, one-off concert with the San Francisco Symphony.

The show—which will take place Friday, September 6—will be the first concert at the city’s Chase Center venue, and will mark the 20th anniversary of the band's 1999 live album, S&M.

“We’re honored to take part in the Grand Opening of the Chase Center in San Francisco as we celebrate the 20th Anniversary of S&M,” the band wrote in an Instagram post. “Join us at what is sure to become a cultural landmark in the Bay Area for S&M².”

A Chase ticket pre-sale is live now, while tickets go on general sale Friday, March 22nd at 10 a.m. PT. You can purchase them at chasecenter.com.