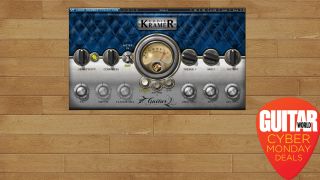 This Cyber Monday, we've seen massive deals on everything from guitars - acoustic and electric - to amps, pedals and everything in between. One thing we haven't covered as much though, is guitar plugins. Fortunately - in that arena - we've just found one of the more amazing sets of deals we've seen all weekend.

Waves is discounting five of its best guitar recording plugins - the Eddie Kramer Guitar Channel, GTR Solo, PRS SuperModels, CLA Guitars and Renaissance Axx - by as much as 70 percent.

Each of these plugins can do wonders for the tone and sound of your recordings, so take a look at all five and see which strikes your fancy. Be sure to act fast though, these deals end in T-minus 11 hours!

Get Waves' Renaissance Axx Plugin for $29.99
Engineered for guitars, the R-Axx is an all-in-one dynamics processor that delivers mix-ready results in seconds. Get it now for an astonishingly low price.View Deal

Get Waves' CLA Guitars Plugin for $29.99
This all-in-one multi-effect guitar plugin - developed in collaboration with Grammy-winning engineer Chris Lord-Alge - can give you professional-sounding tone instantly. Grab it now at a ridiculous discount.View Deal

Get Waves' PRS Supermodels Plugin for $39.99
Created in collaboration with Paul Reed Smith himself, the Waves PRS SuperModels plugin models three high-end PRS amps - the Archon, the Dallas and the Blue Sierra/V9. Act quickly and get the set for just $40.View Deal

Get Waves' Eddie Kramer Guitar Channel for $29.99
Developed in collaboration with legendary producer and engineer Eddie Kramer, this plugin brings the best in '60s and '70s classic rock tone to your fingertips. Get it now at a 70% discount.View Deal

Get Waves' GTR Solo plugin for $14.99
This plugin features models of amps by the likes of Fender, Vox, Marshall and more, plus distortion, modulation and ambient effects. At $15, it's an absolute steal.View Deal