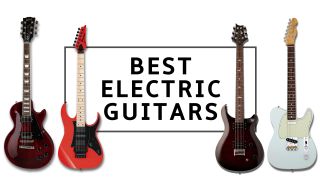 To some, choosing the best electric guitars in the world might mean simply finding the most expensive, most tricked-out models in the catalogue. But 'the best' means different things to different players and picking the right guitar is a very personal choice.

For this list we’re presenting the best electric guitars around today, covering a wide spectrum of genres, playing abilities and, most importantly, budgets.

What is the best electric guitar?

All things considered, there are a number of things which any 'good' guitar, at any price point, will nail. They'll be well built, they'll sound great, and they'll be a joy to play. Underneath that there are countless variables, many of which fall into the realms of subjectivity.

For that reason it's hard to pick just one guitar to recommend over another. What we have done, however, is pick a selection from some of the best brands around. Fender, Gibson, PRS and Ibanez are all represented here. If we had to pick one, however, we'd go for the Gibson Les Paul Studio, purely on account of its ruggedness, tones, playability and vibe.

How to buy the best electric guitar for you

As we've outlined above, guitar buying is a subjective thing. The most important thing you can do before any purchase is have a serious conversation with yourself. What exactly is it you're looking for? Are you an intermediate player looking to take the next step up? Or perhaps you're switching genres, or looking for something that can handle the rigours of touring life.

Whatever it is you need, there will be a guitar made for that scenario. The savvy buyer will have a shortlist long in advance of handing over their money. If not, we’ve done the work for you here.

There is definitely space for a bit of 'gut feeling' when you're shopping. We've all had situations where we've played a guitar we'd never normally have looked twice at and had it pleasantly surprise us. Keeping an open mind is no bad thing. Sometimes when you pick up a guitar you just know. There's no rationale.

But, instinct aside, you can at least put yourself in the right ballpark by using guides like this one to hone in on what works for you. With so many variables, it can be hard to know where to start. So allow us to take your hand and walk you through some of the best electric guitars on the planet today. They’re ordered by price and we’ve found the best deals on each one, too.

The best electric guitars you can buy right now

The best electric guitar for kids

When choosing an electric guitar for a child, there are a number of things to consider. The guitar itself has to be reasonably light to ensure smaller shoulders can cope. It needs to be easy enough to play for small hands, with an appropriately-sized neck. And it needs to look cool. Because, let's face it, at that age the look of the guitar arguably trumps its ability to traverse multiple tonal areas.

There are a few dedicated mini versions of regular guitars, but we've gone for one which is full sized, fully equipped and affordable. The Squier Bullet Mustang features a slightly smaller scale length which, combined with the basswood body, make it easy to get to grips with. But, importantly, its double humbuckers ensure it can keep up with most grown-up guitars. And it looks totally badass.

£334
View at Amazon
£363.12
View at Amazon
£387
View at Bax-shop UK
See all prices (5 found)
Gibson homage at a fraction of the cost
Ideal marriage of price and performance
Perfect step up for learners
Humbuckers aren’t the most versatile

When we're talking value, one guitar instantly springs to mind. The Epiphone Les Paul Standard has been the go-to guitar for thousands of players over the years, and for good reason. Put simply, this guitar ticks a lot of boxes. It's exceptionally well-made, it sounds great and, importantly, it won't break the bank.

For many players, this guitar hits the perfect sweet spot between quality, price and performance. It's why you see so many people graduate to it as their first 'serious' axe, and why you see so many on the weekend warrior circuit. If a bona fide Gibson is out of reach financially, you can't go far wrong with one of these.

The best electric guitar for beginners

The entry-level guitar market is in a much healthier place than it was even 10 years ago. Now, manufacturers and brands are employing far higher levels of quality control than they did. This means even 'cheaper' guitars deliver tones, construction and playability previously reserved for mid and higher level models.

The Squier Classic Vibe '60s Stratocaster is the perfect example of this. Previously, an entry-level guitar would tend to last a couple of years, have string action like playing razor wire, and tones like a horde of bees in a tin can. Not so any more.

This Classic Vibe looks, feels and sounds incredible, and even gives some of the cheaper Fender models a run for their money. Style and playability at a price that won't make your eyes water. Progress is a wonderful thing.

Widen your palette with this top baritone electric guitar

Baritone guitars are pretty unique. By having a longer neck, and utilising thicker strings, you get the advantage of entirely new scales, tones and techniques opening up to you. Granted, the majority of baritone players tend to be metal fans looking for new ways to achieve heavier sounds, but there's beauty in the beast too.

The PRS SE 277 is a perfect example. It combines the 27.7” extended range and deeper, darker sound, with the incredible build quality and attention to detail we've come to expect from PRS' sister line.

The 277 probably won't be anybody's go-to main guitar, but as something a bit different which inspires a different way of playing, it's a great choice.

The best electric guitar to inject more vibe into your playing

£839.65
View at Amazon
Classic styling
More tonally interesting than a regular Tele
Neck is a dream to play
Won't satisfy all styles

Vibe is a somewhat nebulous concept. Essentially, it's a guitar which evokes a certain mood or level of cool. While any number of axes could fit the bill, we've gone for the excellentFender Vintera '60s Telecaster Modified.

The Vintera combines a simple Tele layout with some clever tweaks under the hood and oodles of aforementioned vibe.

Underneath the standard alder body, you get access to some pretty unique pickup options. A special four-way switch offers both single coil pickups in series, while the S-1 switch on the volume knob inverts the phase giving you plenty of usable tones to choose from.

Play a range of styles on this versatile electric guitar

For many players, there comes a time when they want to branch out. To try new styles of playing, sounds or genres. And, while it would be nice to have specific guitars for each of these styles, sometimes that isn't possible. So we look for a jack of all trades. The Fender American Performer Stratocaster is one such guitar.

Offering the dual benefits of classic single coil Fender attack, with the extra heft of a bridge humbucker, we get a guitar that can handle most styles of music with ease. Add to that the ability to split the humbucker into two single coils, and you have all the versatility you could ever need. And, being a high-end Fender, you know the sounds on offer are all top notch.

The best electric guitar for metal

£709
View at Bax-shop UK
£761
View at Amazon
£798.95
View at Amazon
See all prices (12 found)
A legend in its own lunchtime
Wider tonal palette than you'd imagine
Oozes class
Locking nuts not ideal for regular tuning changes

Within guitar styles, there are certain sub-genres. Arguably the biggest niche is guitars made for heavy styles of music. This manifests itself in the body styling, ergonomics and hardware, with certain brands - like ESP and Schecter - dominating this world. But it's arguably the biggest name in metal guitars we've opted for here, and in one of their most iconic models.

Step forward the Ibanez RG550. Reissued last year, and based on an absolute legend of the genre, the RG550 is engineered specifically with metal in mind. The wafer-thin neck, locking trem, locking nut and high-output humbuckers give this guitar everything it needs to shred.

One of the best workhorse electric guitars around

£1,433.35
View at Amazon
A lot of guitar for the money
Tonally versatile
Built to last
Slim neck not to everyone's tastes

When you talk about workhorse guitars, you're looking for something which is equally at home in the studio, on the road or stored under the sofa to be brought out during the commercial breaks.

Pound for pound, you can't go far wrong with the Gibson Les Paul Studio. As well as being built to survive a nuclear war, the Studio line combines the tones, playability and durability of a solid, high-end guitar with the price tag that keeps it in range of the masses.

In order to achieve this balance, Gibson removes some of the aesthetic touches you'd find on a Standard model, like binding around the body, but the rest of it is largely as you'd find on guitars higher up the price bracket.

The best electric guitar for jazz

And now for something completely different. When you think about jazz guitars, you think large bodies, semi-hollow construction and warm humbuckers. Combine these things together and you get an instrument capable of producing those silky smooth, rounded tones which form the cornerstone of jazz guitar.

The Gibson ES-335 is a heavyweight in this field. It marries up a range of exceptional tones, with the highest levels of build quality and silky-smooth playability. Gibson has been producing variants of the ES-335 for over 70 years, and that heritage is evident in every note, trill and legato.

It's not cheap, but that tells its own story. Jazz guitars don't get much better than this.

The best electric guitar for when money is no object

Launch price: From $10,160 | Spec: Varies from guitar to guitar, but you can expect premium appointments, exotic woods and finishes

Check Amazon
You won't find a higher spec guitar
Jaw-dropping quality and tones
Costs the same as a second-hand Porsche
You wouldn't want to drop it...

We round off this list with something from the very top shelf. Imagine your lottery numbers came in, and you could cherry pick any guitar from the catalogue. There's no place for subtlety or conservatism. We're looking for the absolute pinnacle of guitar-making, and our search begins at the outer limits of elite luthiery.

If you're spending that sort of money, you want something a bit out of the ordinary. You want something nobody else has, and you want to pay for the privilege. For that reason, we've opted for a PRS Private Stock Custom 24. We say 'a' Private Stock, rather than 'the', because each of these fine examples of craftsmanship is a true one-off.

Put simply, these guitars are the best of the best, from one of the most revered brands there is. Whether you play it, or mount it on the wall, is entirely your call…

About the author
Chris Corfield is a journalist with over 10 years of experience writing for some of the music world's biggest brands including Orange Amplification, MusicRadar, Total Guitar and Dawsons Music.