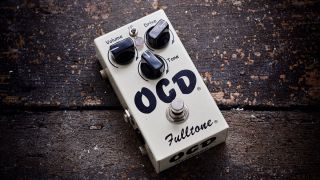 The OCD overdrive, one of Fulltone's most popular pedals. (Image credit: Future)

Mike Fuller, the founder of boutique pedal company Fulltone, has issued an apology after being widely condemned this week over comments surrounding demonstrations against police brutality following the death of George Floyd.

“What is this like night 4 of looting with 100% impunity,” read a post added to the brand’s official page - which bears a photo of Fuller as the profile picture - on June 2.

“The pussy Mayor and Governor don’t give a shit about small businesses, and it’s never been more clear.”

Fuller further attracted negativity after adding, “Ahh I feel better, and flushed out some prissy boys who were raised to pee sitting down. Now I’ll delete.”

His outburst provoked widespread condemnation from the guitar community, including from several high-profile names.

“Never buying another Fulltone pedal and will find a good way to get rid of those I already own,” said Blink-182’s Mark Hoppus, while Jason Isbell instead recommended followers “check out black-owned pedal company Dogman Devices… Fulltone has always made overpriced junk.”

Fulltone’s own fan page, Fulltone Pedals, also opposed the stance, stating on Facebook, “This is not a #riot this is #rebellion ! #justiceforgeorgefloyd I don't care what Mike says on his own page, I run this page and will promote the movement.”

A reader contacted GW with an email that one customer received from Fuller in response to their criticism, which has been widely circulated on social media.

“I am begging you to sell your pedals because you actually don’t deserve them,” the email reads.

“You are actually so racist that you believe the Good people who are protesting are the same as the Organized gang banger criminals who are looting ‘store fronts’.

“Those ‘store fronts’ are good hardworking people’s lives and livelihoods. I’m [sic] fact if I see you with a Fulltone pedal I will tag it and break into your house and loot it from you, because its my free expression to do so… right?”

Now, Fuller has issued an apology on Facebook, which reads:

“I want to address a couple of things I posted recently that have rightfully pissed off a bunch of people. A couple of days ago I made a comment about the mayor and Governor being pussies for allowing looting.

“The rest of that sentiment that did not get shared is ‘...they were arresting the good people protesting and allowing professional crews to loot with impunity.’ Adding that doesn’t make it better, but I do believe that no one should destroy another person’s property...I can’t wrap my head around that one.

“But the real question should be: what is privileged white guy doing opening his mouth about this, let alone throwing gas on a sensitive subject? I’ve been thinking a lot about his, and I believe the answer is insensitivity, anger, and most importantly Fear.

“Fear from just coming out of this COVID quarantine and it’s affects on business, and, fear or many things, including fears of lack of relevancy, aging, and fear of losing what you think is yours. Which is a phallacy [sic] in itself, because I, not owed anything. Fear of being looted and harmed. In my case, I think I’ve been in fear for a very long time, and fear can makes people say stupid things.

“I’ll end now by saying I apologize to anybody I’ve offended, and believe that anyone who abuses or harms another person should be prosecuted to the fullest extent of the law, that includes cops, and I shouldn’t speak to this subject any more unless I’m out there doing something positive, which is not the case right now.”

Founded in 1993, Fulltone is one of the original boutique pedal companies, and best known for its OCD overdrive and Cylde wah pedals.

This week saw the music industry black out its websites and social media accounts on Tuesday June 2 in support of The Show Must Be Paused, BlackOut Tuesday and Black Lives Matter.