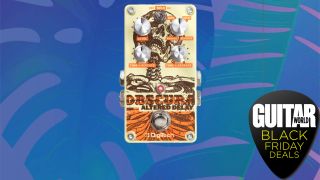 This Black Friday, ProAudioStar has been offering some absolutely absurd deals on gear ranging from guitars to effects pedals and more.

One of the most eyebrow-raising deals of the bunch has been a deal on DigiTech's Obscura delay. Usually $169.95, the Obscura's price has been more than cut in half, to a jaw-dropping $77.99.

Featuring four trippy delays (analog, tape, lo-fi and reverse), and the ability to degrade all four via a unique control set, the Obscura truly sets itself apart from the ever-growing delay pedal pack.

The Obscura's audio quality is also second to none, while its build is incredibly sturdy. The pedal even comes with a die cut Hook-and-loop Pedalboard Pad, which makes for easy semi-permanent mounting on just about any pedalboard.

The Obscura stands out for both its durability and sonic versatility, and for less than $80, it's an absolute no-brainer.

DigiTech Obscura Altered Delay: $169 $77 at ProAudioStar
For anyone looking for a digital delay with a difference, may we present the Obscura, which packs four trippy delays (analog, tape, lo-fi and reverse), with the ability to degrade each and every one via a unique control set. Given this pedal's sterling audio quality and a rock-solid build, this is an unbelievable bargain.View Deal