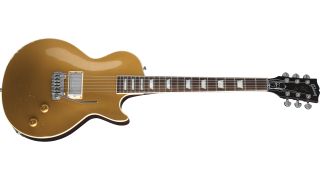 Back in February, Aerosmith guitarist Joe Perry teased a new collaboration with Gibson. Now, the Gibson Custom Shop has released full details on the Joe Perry Gold Rush Les Paul Axcess, which the company says represents Perry’s “idealized vision of a Les Paul model with a vibe, sound and feel that is pure rock 'n' roll.”

The new guitar is based on a Les Paul Axcess Standard and boasts a two-piece plain maple top, a solid mahogany ’59 C-shape neck and an Indian rosewood fingerboard. Other features include a single hot 498T humbucker, a push/pull coil-splitter and a two-point spring tremolo system. At Perry’s request, each guitar has been painted in Antique Gold and hand-aged at Custom Shop for a worn, broken in feel and aesthetic.

Said Perry, "After several decades of playing many different guitars I think this one represents the nearly impossible task of bringing the best of all of them into this new signature model.”

The run of instruments consists of 25 signed and 125 unsigned models sold worldwide. For more information, head to Gibson.com.