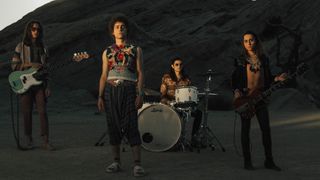 Greta Van Fleet have announced the release of their full-length debut album, Anthem of the Peaceful Army. The album is due out October 19 on Lava/Republic Records and is available for pre-order now.  Fans who pre-order the album will receive an instant grat track, the brand-new song “Watching Over,” which you can listen to below.

Collectively written by all four members—guitarist Jake Kiszka, bassist and keyboardist Sam Kiszka, singer Josh Kiszka and drummer Danny Wagner—the ten original songs on Anthem of the Peaceful Army explore a variety of topics that, according to the band, include fresh starts, love, integrity, innocence, adventure, diversity and peace, the life cycle and its inherent responsibilities, courage, masked deceptions, revolution and truth.

Anthem of the Peaceful Army was produced by Marlon Young, Al Sutton and Herschel Boone (The Rust Brothers) and recorded earlier this year at Blackbird Studios in Nashville and Rustbelt Studios in Royal Oak, Michigan.

Jake Kiszka spoke with Guitar World earlier this year while the band was in the process of recording Anthem of the Peaceful Army:

“This is going to be a definitive statement,” he said. “Our first studio EP, Black Smoke Rising, was kind of a snapshot of where we were at the time, but the full album is going to be the real deal. I see it as a big-picture look at where we are now and where we’re headed."

3.   When The Curtain Falls