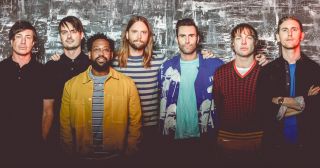 Online musical instrument marketplace Reverb.com has partnered with L.A.’s Techno Empire to sell gear used on stage and in the studio by Maroon 5. Nearly 200 items—including guitars, microphones, keyboards, and more—will be available for purchase on Reverb beginning on Thursday, August 30.

“We used all of this gear when we were kids, working hard to establish ourselves as a band. Now, we’re in a new phase and we need to clear out what we’re not using anymore to make room for the equipment that will help us create what comes next,” said keyboardist and rhythm guitarist Jesse Carmichael. “This gear was such a huge part of our story and I hope that it goes to an up-and-coming band or musicians who can make it part of their own story.”

Other items include dozens of microphones, including a chrome Shure wireless microphone used by Levine throughout the tour supporting It Won’t Be Soon Before Long, the band’s second studio album.

The sale will also feature:

· A Gibson Les Paul Jim Beam guitar that the band received in the early 2000s while on tour to support Songs About Jane. “Either Adam or James decided to send that guitar up into the air at the end of one of the songs and when it hit the ground we hit the downbeat of the end of the song. I’m not sure if it recovered into a playable state, but it’s a cool-looking guitar.”

· A custom-built keytar that was a one-off prototype given to the band by a friend. “If anybody is interested in rocking out on a keytar, then this one is one-of-a-kind,” Carmichael said of the instrument.

· A Yamaha S90 keyboard that Carmichael used while the band was touring as Kara’s Flowers as well as on the Maroon 5 tour to support the band’s debut album, Songs About Jane. The keyboard, which was one of the first that Carmichael ever toured with, was also used to record several tracks from Songs About Jane, including “Secret.”

· A custom made OD100 guitar head that Carmichael used in the late ‘90s when the band was touring as Kara’s Flowers. “This was the head that I used on our very first tours right after high school,” he said.

· An Akai MPC4000 drum machine the band used while writing It Won’t Be Soon Before Long in the mid-2000s. According to Carmichael, the band wrote the album while living at “The Mansion”—the Laurel Canyon home and recording studio owned by producer Rick Rubin and used to produce the Red Hot Chili Peppers' Blood Sugar Sex Magik, among other albums.

· An Open Labs MiKo keyboard that the band used live on tour before Sam Farrar joined the band as a touring member in 2012. “It’s a pretty cool setup for playing with virtual software instruments,” Carmichael said of the keyboard, which he indicated may still be loaded up with the samples and sounds the band used live.

· A Belvedere Model 1000 chord organ that lived in several of the band’s early houses.

The band will also be selling several road cases stamped with the band’s name. “I like the idea of road cases being passed down through different bands,” Carmichael said. “It’s nice to know that there’s some history there when you put your gear in a case that’s been all around the world with a band.”

Preview a portion of the items that will be available in the Techno Empire Reverb Shop on August 30 here.