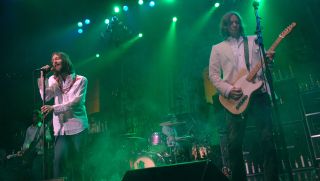 The Black Crowes announced their breakup in 2015, and for the past several years front man Chris Robinson has been busy with his jam band-oriented Chris Robinson Brotherhood while his brother, acoustic and electric guitarist Rich Robinson, has headed up the Magpie Salute.

The 46-date outing kicks off June 17 in Austin and runs through September 19 in Los Angeles.

Additionally, the reconstituted band is playing an intimate show at New York’s Bowery Ballroom tonight, November 11, and on November 14 at the Troubadour in LA.

According to a report in Rolling Stone, the brothers will be joined by an entirely new Crowes lineup consisting of Earthless guitarist Isiah Mitchell, session bassist Tim LeFebvre, keyboardist Joel Robinow and drummer Ojha.

Said Chris Robinson in a statement, "I'm thrilled and blessed to be playing with my brother celebrating the music we've made and bringing our lives together full circle. Long live rock n' roll and the Black Crowes!"

Added Rich, "First and foremost, I'm really happy to have my brother back in my life. To be able to play music again together and celebrate the first record we made as kids, is a gift. To have these songs stand up after 30 years is something I could've never fathomed."

Back in 2016, Rich Robinson addressed the Crowes' breakup in Guitar World, saying “I truly believe we should have done something better than we did to end – for the fans not for us – even if it was just one final run somewhere. It would have been a far cooler thing to do than to have it just end.”

It appears they’ve found that cooler thing. Let’s hope it’s also not the end, but rather a new beginning.

You can check out the full Black Crowes tour itinerary below.