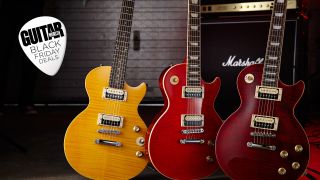 It’s a simple fact – every guitar player on the planet needs to own a Les Paul. Even David Gilmour, the Pink Floyd legend rarely found without a Fender Strat in his hands, felt like he had to invest back in one when the English progressive rock heroes were recording their 1979 masterpiece, The Wall.

“There was one guitar trader in New Jersey who had the 1955 Les Paul on his list,” he told Christies earlier this year, just ahead of auctioning some of his most prized instruments. “It was all gold - the back and the sides and the back of the neck, and it looked great… not long after it arrived I used it for the solo on Another Brick in the Wall, (Part 2). We injected it straight through the desk and onto tape, not through any amplifier at all. I’ve always loved that guitar.”

In fact – you could ask just about any of the Strat masters, from Jeff Beck and Eric Clapton to Mark Knopfler, and they’ll tell you the same. The Gibson Les Paul is one of the most iconic guitars ever made, and with Epiphone, you can own a Les Paul at a much more affordable price bracket. While the classic singlecuts might not be quite as versatile as other instruments, there’s simply no replacement for that era-defining tonal thickness and endless sustain. Which is why we’ve rounded up the best deals for this year’s Cyber Monday…

Epiphone Les Paul Traditional PRO-III Plus: $699, now $549
This Epiphone not only has the looks - thanks to a gorgeous flame maple top - but it has tones to die for, too, with made-in-USA Gibson ’57 Classic and Super ’57 zebra pickups, enhanced by coil-split, boost and phase controls via push-pull control pots. Sub-$1,000 Les Pauls don’t come much better than this, especially with $150 off the asking price at Musician's Friend.View Deal

$130 off Epiphone's Les Paul Silverburst at Musician's Friend
This sleek, nicely spec'd Les Paul is now available for $549, down $130 from its usual $679 price tag.View Deal

Get $30 off the Epiphone Limited Edition Les Paul Special-I
This is a limited edition version of Epiphone's best selling model. Loved by both beginners and seasoned veterans, this thing is a workhorse that's now available for just $129.View Deal