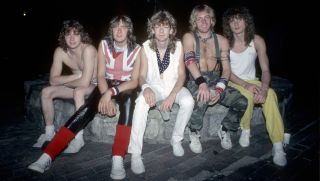 The nominees for the 2019 class of the Rock and Roll Hall of Fame have been announced, and the artist list includes Def Leppard, Rage Against the Machine, MC5, Radiohead, the Cure, Todd Rundgren, John Prine and more.

On the Rock Hall website, Def Leppard’s current lineup is listed along with former guitarists Steve Clark and Pete Willis.

The top vote-getters will be announced in December and inducted March 29, 2019 at a ceremony at the Barclays Center in Brooklyn. The event will be broadcast on HBO later next year.

In order to be eligible for this year's ballot, artists or bands need to have released their first single or album in 1993 or earlier. Six of the nominees are on the ballot for the first time, including Def Leppard, Prine, Roxy Music, Devo, Nicks and Rundgren.

A voting pool of more than 1,000 artists, historians, journalists and members of the music industry will select the new class, and fans can vote at RockHall.com or by visiting the museum in Cleveland and making a selection at an interactive kiosk.