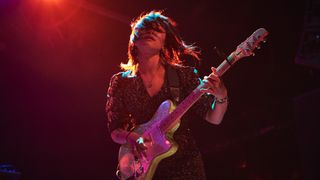 Though much of the world remains in near-total coronavirus-related lockdown, and seemingly will be for at least the foreseeable future, guitarists around the world continue to innovate, and bring comfort to our ears.

Whether they're shredding on balconies, teaching us legendary solos from their homes or, most vitally, still creating fantastic new music, guitarists have not allowed the coronavirus to get in the way of their creativity.

Featuring everything from polyrhythmic acoustic tapping, to a quarantine-themed funk/blues bonanza, to a spacey, eight-minute funk and Krautrock-informed jam, this week's gathering of new guitar greatness is bound to have something you'll enjoy.

Start scrolling and give your ears a treat. You deserve it!

With a newly launched Ibanez signature model to her name, Yvette Young this year solidified her position as a bona fide modern-day guitar hero - and this first taste of second album, Technicolor, captures her finger-tapping chops at their most mesmerizing.

Nero is a near-seven-minute odyssey that weaves new textures into the Bay Area outfit’s math-rock tapestry; it ebbs and flows with waves of modulation and Vox AC30 crunch, as well as Young’s trademark fretboard-spanning extended chords. Now, what tuning do we need to play in to fire lasers from our headstocks? (MAB)

You guys went crazy for the tap-happy Japanese virtuoso’s Ethereal Tuning, and now Nito has released an entire track based around it.

Ethereal Feel may only be a minute-and-a-half, but it has an almost orchestral feel, thanks to that booming low D, and Nito’s fleet-fingered tapping runs. There’s plenty more to come on his solo guitar EP, simply titled N I T O, which lands on April 15. (MAB)

English prog metal six-piece Haken today released Prosthetic, the first single from their upcoming album, Virus - scheduled to be released June 5. Featuring none other than GW contributor Charlie Griffiths on guitar, the band have been fusing synths with heavy music since 2007.

Ed O'Brien, Radiohead's master of texture, has taken almost 30 years to make an album of his own, but from the sounds of Olympik - and the other, dazzling singles from his forthcoming debut solo album, Earth - it'll have been well worth the wait.

Though the delay that accompanies O'Brien's heavily syncopated playing in the song's beautiful chorus brings The Edge to mind for a minute, the way its guitars slot in perfectly with the song's busy rhythm, hypnotic groove and swirling vocals reminds you exactly why O'Brien - and his fellow guitarists in Radiohead - are held in such high regard in the modern guitar pantheon. (JM)

August Burns Red have been giving us sporadic doses of new music in the lead up to their new album Guardians, which dropped April 3. One of the record’s most standout tracks comes in the form of Dismembered Memory - a meandering metalcore masterpiece with plenty of six-string goodness.

One of the acoustic guitar’s most mind-boggling proponents of fingerstyle and percussive playing returns with, um, William Shatner’s Pants.

The track builds on Dawes’ previous polyrhythmic tapping work, and employs some creative use of DigiTech’s Whammy Ricochet to add a little octave sparkle to proceedings.

If you’re bored in isolation, full tab is available through MikeDawes.co.uk. No word on what the name’s about. Strong mug game, though. (MAB)

Fantastic Negrito (born Xavier Amin Dphrepaulezz) released Chocolate Samurai, with a coronavirus-themed music video. “I asked people around the world to send me footage of how they're coping with coronavirus...this is what came back,” he says. A moment of light. We may be isolated behind closed doors, but we are in this together.”

The track features some funky rhythm guitar lines, tastefully gain-drenched leads and feel-good solos. A welcome serving of positivity in the uncertain age we find ourselves in. (SR)

The stripped-back grooves of this Venice Beach duo are half-stoner, half-psych-rock, and new single Bones has plenty of sinewy riff meat to tuck into.

Guitarist Vince Cuneo keeps things simple with the track’s powerchord refrain, but the shadowy overdubs and plentiful phaser use keep it teetering on a tripped-out vibe. (MAB)

Alex Henry Foster - The Hunter (By the Seaside Window)

A 15-minute journey that threatens to redefine the word 'epic,' this post-rock masterpiece from Canadian musician Alex Henry Foster is a sweeping beast that bursts at the seams with moving guitar moments.

Foster's agitated spoken-word delivery is punctuated with stabbing, distortion-coated rhythms and atmospheric leads that perfectly accompany the song's thrill-ride of a music video. With all of the world's current horrors, this is a song you can absolutely get lost in. (JM)

The anthemic Brit-rockers have regrouped for their first release with new singer Jack Bennett at the helm.

Bound showcases the arpeggiated lines and post-rock crescendos the group have made their trademark, with a chorus primed for the kind of mammoth venues they’ve previously played with the likes of Biffy Clyro, Deftones and Bruce Springsteen. (MAB)