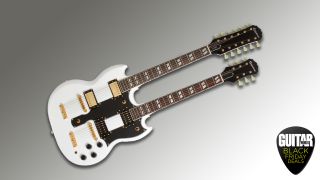 To mark the 50th anniversary of the British Invasion in 2014, Epiphone released a limited anniversary edition of the original “1235” Double Neck that was first produced by their Michigan factory in 1963.

The multiple functionality between its 6-string and 12-string necks, and the option to use both simultaneously ensured its instant popularity among guitar players - with legendary musicians including Pete Townshend, Jimmy Page and even Elvis Presley utilising its ingenious design in their quest for new sounds.

It’s the kind of instrument that will have sat on many a guitarist’s wishlist for a number of years – which is why this $150 Black Friday saving on the alpine white Epiphone G-1275 Custom over at Musician’s Friend will be guaranteed to please, reduced down to only $949.

It features Alnico Classic and Alnico Classic Plus humbucker pickups on the 12-string neck and then the open-coil versions on its 6-string neck, controlled by black speed knobs powered by full-size 500K potentiometers.

For more information, head over to Musician’s Friend.

Get $150 off the Epiphone G-1275 Double Neck
This limited edition doubleneck will be guaranteed to turn heads, from the living room to the stage.View Deal