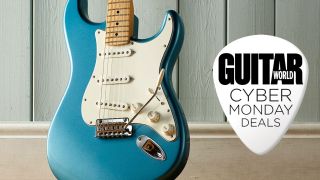 If you're reading this, you probably don't need much of an explainer on the importance of Fender to the world of guitars.

From the Stratocaster - the world's best-selling electric guitar - to the Telecaster to the Jazzmaster, Fender often sets the tone for the rest of the industry, even if the storied company doesn't always get it right on the first try.

From the company's affordable Mexican-made models, to its American-made flagships, to its stunning custom models, there's truly a Fender for everyone.

From the perfect beginner electric guitar - the Squier Bullet Mustang - to the Stratocaster HSS and QMT Telecaster in a gorgeous Pale Moon finish, you can find great deals on any number of Fenders below. Take a look!

Squier Bullet Stratocaster HSS with tremolo: only $109.99!
The Squier Bullet Strat is the perfect guitar for beginners. Featuring a solidbody construction with a 25.5" C-standard shaped maple neck, the guitar's specs massively defy its price point. You needn't worry about an extensive setup process either - you'll be ready to start playing straight out of the box.View Deal

Squier Affinity Telecaster HH: was $199.99, now $159.99
Featuring a solid alder body with a gloss metallic black finish, this humbucker loaded electric guitar would be the perfect starter guitar, or indeed a worthy addition to any guitarist's collection.View Deal

Fender Player Telecaster Silverburst: was $674, now $574
Get your hands on an authentic Fender Telecaster this Black Friday for just over $500. With a classy Silverburst finish and A-class tone, this guitar would be more than a worthy purchase.View Deal

Get $40 off Squier's Stratocaster Starter Pack
For just $179, you get a fantastic beginner electric guitar, a 10-watt practice amplifier, guitar cable, strap and a set of picks - perfect if you're just starting out, or have a potential new player in mind.View Deal

Fender Player Jaguar in Surf Pearl: now only $499.99
Now's your chance to bag an awesome Fender offset for under $500. With an alder body, Alnico pickups and a perfectly configured neck, this electric guitar has the looks and tone to boot.View Deal

Squier Bullet Mustang: now only $119.99
Get the perfect electric guitar for beginners in this unbelievable Black Friday deal. Start playing straight out of the box, thanks to a short 24" scale, which makes your first chords and solos easy.View Deal

Start playing for less with $30 off this Squier FSR Bullet Tele
This rock-solid, entry-level Tele is perfect for beginners and students, and is available now for just $149 - $30 off its usual $179 price tag!View Deal

Start playing for less with $50 off this Squier Bullet Tele
A great deal from Musician's Friend, this rock-solid, entry-level Tele is perfect for beginners and students, and is available now for just $129 - that's a massive $50 off the usual $179 price tag!View Deal

Get the highly regarded Fender Bassbreaker for only $549
With a Celestion 1x12 speaker, tons of recording-friendly features and an unparalleled tone, this combo is a true all-rounder - and it's now available for $200 off in this limited-edition finish!View Deal

Squier Bullet Stratocaster HSS with tremolo: only $109.99!
The Squier Bullet Strat is the perfect guitar for beginners. Featuring a solidbody construction with a 25.5" C-standard shaped maple neck, the guitar's specs massively defy its price point. You needn't worry about an extensive setup process either - you'll be ready to start playing straight out of the box.View Deal

A truly remarkable guitar, the Acoustasonic Telecaster marries that unmistakable Tele tone with a brilliantly designed acoustic. Voiced through a top-of-the-line, Fishman-designed engine, the Acoustasonic has an incredible variety of tones on offer. Though it has an untraditional, eyebrow-raising design, the Acoustasonic is undeniably one of the best, most forward-looking acoustic guitars out there.

Fender's American Performer Strat and Tele models are the closest things out there to jack-of-all-trades guitars. Featuring high-end construction with immaculate attention to detail, phenomenal Yosemite pickups and well-placed, modern appointments, the American Performer models are at the cutting edge, without losing any of the elements that made you fall in love with the Strat and Tele in the first place.

Even though they're half the price of their American-made counterparts, the American Player Strat and Tele have terrific tone and build. If you want the looks, sound and style of a classic Strat or Tele, without forking out top-of-the-line prices, any guitar on the American Player line would be a terrific choice.