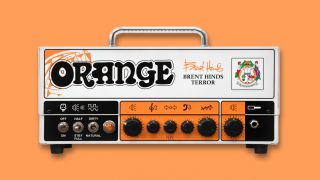 UPDATE: This amp has extremely popular, and has now sold out. However, you can check out the latest deals from Musician's Friend here.

There are many reasons why Mastodon guitarist Brent Hinds would be considered one of the most unique minds in hard rock today – from his screeching heavily-effected leads, furious southern-fried chicken pickin’ to, of course, those gargantuan rhythm guitar sounds.

Having teamed up with Orange for a small lunchbox-sized yet monstrously meaty signature head, with the Brent Hinds Terror he’s managed to create a very classy amp that is infinitely more musical than your typical metal machine – what's more, it features in our guide the best amps for metal.

We've seen several Black Friday discounts on this head already, but right now, Sweetwater is selling it with an astonishing $300 off, dropping the price to just $299 - that's half-price!

You'll need to be quick, though: this deal ends at 5am PT/8am ET on November 29.

Orange Brent Hinds Terror: $299 at Musician's Friend
A must for any Mastodon fan hoping to crank up their own blood and thunder – or anyone on the lookout for a two-channel, lower wattage lunchbox head with enough low-end to trigger an earthquake. Now half-price at Musician's Friend until 5am PT/8am ET on November 29.View Deal

As you’d expect with Orange, the Hinds Terror's full-fat mids have a charming knack for making just about anything sound warm and earthy. The dirty channel gain is voiced more like a vintage British overdrive and cleans up very nicely indeed – offering some of the best blues and darker crunch tones in its price range.

Then there’s a three-band EQ, a tube-buffered effects loop and its Headroom/Bedroom modes which, combined with the half power switch on the front, offer four different wattages to suit your needs. This particular Terror also comes with Hinds’ tribal forehead tattoo and signature on the front, as well as the Mastodon logo at the rear.

Plus! Hinds' bandmate Bill Kelliher has his signature ESP LTD BK-600 going for just $799 at Sweetwater - a sweet $350 off - with 22 other ESP models getting some pretty tasty price cuts.

We're mere hours away from Black Friday 2019, and there have already been some incredible Sweetwater Black Friday deals. We'll be sharing all the best offers right here on Guitar World.