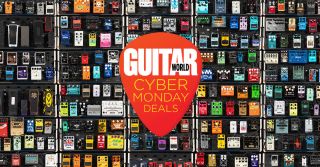 This Black Friday, pedals provided perhaps the best excuse to splurge: they’re relatively low-cost and see some pretty sweet discounts around this time of year. Luckily for us, there are still many great pedals deals available.

In fact, with these deals, equipping your pedalboard with the latest and greatest stompboxes has never been cheaper - as you’ll see below, some brands have even discounted their entire ranges.

Read on for our comprehensive guide to the best effects pedal deals we’ve managed to track down, from retailers far and wide. That ’board won’t fill itself...

Get two TC Electronic pedals for only $75 @Guitar Center
Mix and match from a vast range of effects pedals from the highly regarded pedal company. Chorus, reverb, delay, distortion, drive, overdrive – whatever you're after, all effects are covered in this one of a kind Black Friday deal.View Deal

Bag DOD's Mini Volume pedal for just $34.99 at ProAudioStar
You can get almost 70% off this top-notch volume pedal in this unbelievable Black Friday deal. At this price, there's never been a better time to add a volume stompbox to your pedalboard.View Deal

Boss DD-500 Digital Delay Pedal: now $249.99 | Save $100
If you’re looking for the ultimate delay pedal, with no compromises on power, this could very well be it.View Deal

Boss RV-500 Reverb Pedal: now $249.99 | Save $100
Deep-dive into a world of ambience and explore even greater distances with this spatial navigator.View Deal

Boss VE-500 Vocal Performer Pedal: now $299.99 | Save $100
The all-in-one box for singers, with its own harmonizer, pitch corrector and vocoder as well as on-board studio effects…View Deal

Bogner Oxford Fuzz: now $99 | save $130 at Sweetwater
This innovative fuzz pedal teams a Ferrosilicon transistor with a Rupert Neve-designed transformer for natural-sounding tones that deliver an extremely dynamic response.View Deal

KHDK No. 1 Overdrive: was $199, now $69 at ProAudioStar
This roaring dirtbox is one of the highlights of the Kirk Hammett-fronted pedal company's range, utilizing a pair of gain stages to produce a rich, harmonic overdrive - and a $130 discount makes this a damn-near essential purchase.View Deal

Boss DD-7 Digital Delay: was $159, now $99 at ProAudioStar
With the DD-8 on the horizon, Boss was bound to discount the DD-7, yet this remains a killer deal on an industry-standard delay stompbox.View Deal

Pigtronix Bob Weir's Real Deal acoustic preamp: $99|$180 off
Grateful Dead legend Bob Weir teamed up with Pigtronix to create this no-nonsense acoustic preamp, which promises an unplugged-esque tone running direct into a PA at full volume, with no feedback. It's available with an astonishing discount at Sweetwater right now.View Deal

Way Huge Conquistador: $79 at Sweetwater
This neat take on distortion adds a velcro fuzz-like texture courtesy of an onboard gate; it’s a fierce, aggressive box for any guitarist who seeks to stand out from the distorted crowd.View Deal

Free backpack worth $169 with Line 6 Helix LT at Sweetwater
When looking for a multi-effects unit for your guitar that is super-programmable, so easy to use that the manual is almost superfluous, and with over 200 cab sim, amp models and effects on hand, the Helix LT is a no-brainer. But with a free backpack? Now's the time to get one.View Deal

Save 15% off JHS pedals
You don't need much cash to take advantage of the massive JHS discounts. $29.75 will score you a funky red foot switch, while $46.75 will get you a killer kill switch.View Deal

Save 15% on Keeley pedals
Robert Keeley's handcrafted American pedals are widely regarded, so any opportunity to get money off a D&M Drive, a Dark Side Workstation or any of the other pedalboard powerhouses featured is a good deal.View Deal

Save 15% on J. Rockett effects and power supplies
J. Rockett is offering the biggest selection of all the brands here, with prices ranging from $67.15 for the Audio Design power distributor up to $211.65 for the Tim Pierce signature overdrive.View Deal

Save 15% on a range of Matthews Effects
There are five Matthews pedals up for grabs in the Sweetwater sale, including the Astronomer V2 Celestial reverb, Whaler V2 Fuzz and Chemist V2 Atomic Modulator.View Deal

Save 15% on Bogner effects
Bognor pedals don't come cheap, but if you've had your eye on one, now could be the time to strike with big money to be saved on drive, fuzz and compressor pedals.View Deal

Get 15% off select Wampler effects
Make savings on everything from the Tumnus Transparent overdrive to the Faux Tape Echo V2 delay. Click to explore the full range of discounted pedals.View Deal

Save $37.50 on the Diezel VH4
You want distortion? You got it! Get wide ranging controls for gain, treble, middle and bass, plus presence, deep and master controls to help you shape the low-end and mid-range bite.View Deal

MXR EVH 5150 Katakana Overdrive: $70 off at Sweetwater
This limited-edition drive pedal has been given a limited edition Japanese makeover but inside the enclosure you'll find the Blue Channel of Eddie's signature 5150 III head. It's one of the best overdrives on the market and could be yours for just $129.99.View Deal

DigiTech FreqOut: was $179, now $109.95
One of the most innovative effects pedals of the past decade, the FreqOut is the convincing way to get guitar feedback sounds from any rig at any volume.View Deal

DigiTech Trio+: was $329, now $249.95
You don’t need a band with DigiTech’s ingenious Trio+, which automatically generates bass and drum backing to your chord progressions - and it’s got a built-in looper to boot.View Deal

DigiTech Drop: was $173, now $159.95
This compact pedal remains the best drop-tuning stompbox on the market, with full polyphonic tracking for authentic baritone and extended-range tones.View Deal

SOLD OUT
Pigtronix Tremvelope: was $199, now $99 at Sweetwater
One of the most advanced tremolo pedals on the market, the Tremvelope utilizes a volume-triggered envelope to shape the wobble, with a smooth, natural response - and now it's got a cool half-price offer to boot.View Deal

SOLD OUT
DigiTech Obscura Altered Delay: $77 at ProAudioStar
For anyone looking for a digital delay with a difference, may we present the Obscura, which packs four trippy delays (analog, tape, lo-fi and reverse), with the ability to degrade each and every one via a unique control set. Given this pedal's sterling audio quality and a rock-solid build, this is an unbelievable bargain.View Deal