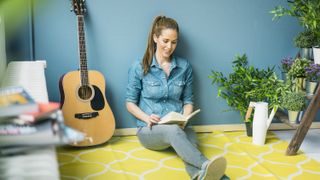 Amid the lockdowns and general clusterf*** state of the world outside, most of us find that now, more than ever, we need a break to indulge our hobbies and distractions. Maybe you've already played your guitar to death and you're looking for other ways to satiate your six-stringed passion?

Whether you’re working from home, your school is cancelled, or you’re on the frontline and in need of a chance to switch-off, our list is full of fine literary distractions for guitar players, whether you choose to pick up a hard copy, listen to the audiobook or download one to your eReader.

From entertaining six-string history, to motivational manuals and, of course, the essential tomes that deal in drugs, debauchery and deals-gone-bad, you’re bound to find something that informs, entertains or inspires you…

Play It Loud: An Epic History of the Style, Sound, and Revolution of the Electric Guitar – Brad Tolinski, Alan Di Perna

There are no truly exhaustive histories of the electric guitar, so much of its early history is based on anecdote or flawed documentation, but Play It Loud takes a decent stab at weaving together the complex web of social, technical, racial and musical histories that have spun out of this glorified plank with strings. It spans the artists and the gear and even includes a foreword by Carlos Santana.
Buy/download Play It Loud

The Dirt: Confessions of the World's Most Notorious Rock Band – Mötley Crüe

Recently dramatised to great success via Netflix, the Crüe’s collective autobiography is quite literally warts ’n’ all. It is, at points, a disgusting, detailed and definitely-NSFW breakdown of the history, idiotic debauchery and major malfunctions of the group. However, it also stands as a testament to music – and Mick Mars' guitar playing – as a vehicle out of some fairly heinous situations, some of which were not of their own creation…
Buy/download The Dirt

If your playing has plateaued and you’re looking for something that goes deeper than the next tab or chord chart, Zen Guitar could be your bible. This is a far more holistic approach to guitar tuition than your usual cheat sheets and song collections, offering chapters on concepts like spirit and discipline and analyzing common mental missteps. Philosophy disguised as a guitar manual.
Buy/download Zen Guitar

Like all the best autobiographies, Life eschews attempts at balance and considerations of continuing relationships (most notably, with Jagger) in favour of candour, mud-slinging and the kind of writing (courtesy of James Fox) that straps you to the front of the rollercoaster for the duration of the ride. The anecdote about Charlie Watts’ response to Jagger summoning ‘his drummer’ at 3am is worth the price of admission alone.
Buy/download Life

Saul Hudson’s life story was interesting even before he crossed paths with Axl Rose: he grew up in 70s Hollywood with Joni Mitchell as a neighbor, his mum was a costume designer to John Lennon and David Bowie and he had a stint as a sponsored BMX rider. Like The Dirt, it does not skimp on the shocking and salacious stuff, or the rock bottom moments and it also covers a wealth of post-GnR adventures that prove essential reading.
Buy/download Slash with Anthony Bozza

Revolution In The Head – Ian McDonald

Widely hailed as one of the finest critical breakdowns of The Beatles’ back catalogue, Revolution In The Head runs through the Fab Four’s releases in chronological order, piecing back together the cultural fabric they tore to shreds in the process. An ambitious, well-researched and near-academic (yet not dull!) masterwork. But don’t take our word for it: Noel Gallagher described it as “f**king amazing”.
Buy/download Revolution In The Head

If Morrissey’s recent antics have left you questioning your love of The Smiths, perhaps Marr’s biography will allow you to quench that thirst without lining Steven’s pockets in the process. Marr’s tales of growing in Manchester and the music, mindset, people and places that shaped his still-innovative approach to the guitar and songwriting are essential reading for any indie kid.
Buy/download Set the Boy Free

Hunger Makes Me a Modern Girl: A Memoir – Carrie Brownstein

While Brownstein is best known for both her six-string savvy in Sleater-Kinney and for Portlandia, the sketch show she developed and starred in with Fred Armisen, she is also a brilliant writer (a career that predated the band). Her biography has been hailed for its disarming honesty, wit and poignant reflections on her search for identity and meaning through the music she loves and makes.
Buy/download Hunger Makes Me a Modern Girl: A Memoir

R. Crumb’s 80s music trading card sets – Heroes of the Blues, Early Jazz Greats, and Pioneers of Country Music – are collected here in a stunning, full-color book. Each icon (not limited to guitar greats, but including the likes of Big Bill Broonzy, Son House, Blind Willie McTell and Skip James) is featured with an R. Crumb portrait and bio. It’s widely available on Kindle, but if you can track down a hardcover copy, you’ll find it comes complete with a CD compilation, handpicked by Crumb.
Buy/download R. Crumb’s Heroes Of Jazz, Blues and Country