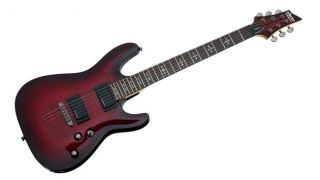 Whether you’re a first-time guitar buyer or a professional with a chronic case of G.A.S. and a limited budget, there’s never been a better time to be in the market for an affordable new guitar.

While it’s been pretty easy to find a good electric solidbody with basic features and above average playability in the sub $500 range for the last 10 or 15 years, most of these instruments featured hardware, electronics and materials that placed them in the entry level category, making them useful only as temporary solutions before necessary upgrades.

Recently though, the gap between entry level and professional guitars has narrowed, as have the choices in the sub $500 range. Compiled by a group of Guitar World staffers, these 10 axes will give you fantastic tone and great playability at prices that won't leave cobwebs in your bank account.

Unleash your inner shredder or metalhead without breaking the bank.

Smooth, affordable and ferocious all at once, the Schecter Demon-6 is perfect for unleashing your inner speed demon. The guitar's thin-C profile neck, cut from maple with a satin finish, is incredibly quick and rewards a light touch. The bridge is simple but well-built, while the guitar's active pickups—powered by an easily accessible nine-volt battery—are absolutely terrific. Otherwise, the updated Demon-6 remains the same as its predecessors, with industrial black chrome hardware, burled tone and volume knobs and a Crimson Red Burst finish.

Tone-wise, the Demon-6 truly lives up to its name. The bridge humbucker is a workhorse with strong, growling mids and an absolutely diabolical amount of high-end—a gold mine for metal soloists. Those who don't wish to summon demonic forces with their playing will find that the Demon-6's cleaner tones are just as satisfying. Any punchy classic rock riffs are a breeze, while the cleanest settings yield startlingly articulate leads that are more than adequate for even the most subtle of parts.

Fantastic Thinline tones for a bargain.

Squier's take on the classic 1972 Fender Telecaster Thinline brings the guitar's iconic looks and sound to the table at an incredibly affordable price point. With a white pearloid scratchplate, finely carved f-hole and Fender-embossed humbuckers, Squier's version of the guitar certainly looks the part. Though, like most other Squiers, the Modified '72 Telecaster Thinline features a gloss-finished modern C neck, the guitar's performance and tone—considering its price tag—is simply phenomenal.

The Modified '72 Telecaster Thinline's cleans from the neck and middle positions are rock-solid. Reminiscent of the sounds produced by fat P-90-esque single coils, they pack plenty of punch. The bridge humbucker yields a much more formidable voice that would sound right at home coming from an overdriven, cranked-to-11 valve amp. The guitar's open mid-range makes it ideal for both delicate fingerpicking and massive, in-your-face rock riffing. Like its Fender-produced big brother, the Squier Modified '72 Telecaster Thinline is a beautiful instrument that can wear any number of hats.

A younger brother of sorts to the S2 Standard 24, the PRS SE Standard 24 gives you a ton of bang for your buck. Though its Vintage Cherry-finished top makes it look a bit cheaper than the S2, the guitar does—unlike the S2—come with bird inlays as a standard feature. Its non-locking SE-level tuners are incredibly easy to handle, while its vibrato is near identical in appearance to the S2's. The guitar's electronics are installed in a cavity as—just like the traditional USA-made Custom 24 design—the SE Standard 24 features no scratchplate.

A low-cost, twin-humbucker single-cut for the ages.

£377
View at Bax-shop UK
£413.20
View at Amazon
£462.57
View at Amazon
See all prices (8 found)
Come on, it looks incredible!
Impressively articulate and responsive pickups
Player-friendly low tension
Control layout is a bit on the awkward side

This slim mahogany single-cut can genuinely give a Les Paul a run for its money. Featuring two incredibly responsive Broad’Tron pickups, the Gretsch G5220 Electromatic Jet BT Single-Cut can handle both detailed, expressive lead work and scorching hard-rock with equal aplomb. Though the fretboard is made of black walnut, the guitar is smooth and elegant enough to pass for a much more expensive instrument at first glance.

The Broad’Tron is a humbucker-sized Filter’Tron- style (PAF warmth and single-coil brightness), giving the guitar pristine cleans with a touch of vintage Gretsch twang. Hard-rock and even metal tones are no sweat for this thing either. Its harder-edge tones are confident and formidable, without losing any of the articulation the guitar exhibits when engaged in more subtle work. The guitar's low action and player-friendly tension'll also have you waking up the neighbors.

An aggressive rock and roll beast

When it comes to guitars with the perfect combination of cool styling, righteous tones and amazing value, Danelectro has been the guitar industry’s shining city on the hill since 1954. The company's '59XT model is no exception. The guitar's tone is rich, thick, dynamic and musical. Its neck has 21 jumbo frets with a shallow, rounded profile, while the profile itself is a shallow C shape that plays fast and comfortably. The pickups consist of a high-output single-coil P90 at the neck position and a pair of iconic Dano lipstick tube pickups placed side-by-side in a humbucking configuration at the bridge position. The Wilkinson tremolo is floating, so users can raise or drop pitch.

The '59XT's tone is simply ferocious. The P90 and lipstick humbucker absolutely roar with a vicious snarl that emphasizes delicious upper midrange frequencies that slice through a mix without sounding shrill or harsh. The Wilkinson tremolo has a vintage-style non-locking design with all of the expected tonal benefits, but even the most aggressive whammy action won’t knock the strings out of tune.

£79
View at Amazon
£79
View at Amazon
See all prices (3 found)
2 Amazon customer reviews
☆☆☆☆☆
Incredibly lightweight
Easy to play
Surprisingly muscular, clear pickups
There is a limit, at this price, to how much you get

A merger of the Les Paul Junior and the Melody Maker, the Epiphone Les Paul SL is one seriously kick-ass guitar. Its poplar body is light as a feather but still has all the substantial heft of a Les Paul Junior without feeling cumbersome. The SL features a custom single-ply pickguard that surrounds the two Epiphone 700SCT (bridge) and 650SCR (neck) ceramic single-coil pickups. Aside from that though, the SL is a typical single-cut Les Paul Junior with no binding, a mahogany neck, a slim-taper D-profile neck shape, 22 medium jumbo frets, an adjustable intonated “wraparound” stopbar tailpiece, “tophat” master volume and tone controls with a three-way toggle switch and premium die-cast 14:1 tuners.

Epiphone imbued the SL’s ceramic pickups with plenty of body and roundness, which gave these plump single-coils a great deal of touch-sensitivity. Even from a cranked amp, they still sound incredibly balanced and defined. The guitar stands perfectly well on its own as an instrument that is poised for rock and blues, with a distinctive tone that cuts on its own terms. What’s even better is how flawlessly the guitar plays, thanks to Epiphone’s consistent textbook setup on its instruments.

The Mitchell MD400 offers the quality, playability and modern, custom design aesthetics normally only found on instruments costing two to four times more. The guitar features a 3+3 tuner configuration on the headstock, a slim, seamless contour where the set-in neck joins the body, and a neck and body made of mahogany. The neck provides 24 tall/narrow medium jumbo frets, a 25 1/2-inch scale, 15 3/4-inch radius, and a shallow “C” profile, and the back of the neck has a gloss finish that matches the body.

Each MD400 is set up to play perfectly out of the box, requiring at most a simple truss rod adjustment to adjust for climate. The alnico V mini-humbucker and full-size alnico V humbucker pickups also deliver their own distinct personality, with a voice-like midrange, tight bass and tonal versatility thanks to the coil-tap function. These are the kind of details that were previously non-existent on guitars selling for less than $500.

Though it lacks the DiMarzios its big brother features, the Albert Lee HH's Sterling by Music Man four-conductor humbuckers certainly don't slouch themselves. From gorgeous, ringing cleans to chunkier single-coil sounds that charge forth with impressive clout, the Albert Lee HH punches well above its weight. With its sturdy, player-friendly construction and dazzling tonal variety, you can see why Lee was convinced to abandon his signature vintage Teles to design his own standout model—now available at an affordable price.

£281.54
View at Amazon
1 Amazon customer review
☆☆☆☆☆
Sustain that would impress even Nigel Tufnel
Is equally great for metal rhythm riffing and leads
Looks amazing
It'd be nice if it came in more finishes

Sleek, and chock-full of plenty of visual and sonic attitude, the Jackson King V JS32T is simply one of the best bang-for-your-buck deals in the metal guitar market today. With Jackson's trademark pointy headstock and Sharkfin position inlays, this thing makes a hell of an impression before you even play a note. The King V JS32T features a bolt-on, graphite-reinforced maple speed neck with 24 jumbo frets and a 12" to 16" compound-radius. The guitar's two Jackson humbucking pickups are fitted with ceramic magnets.

The King V JS32T's tone is incredibly aggressive, while its sustain would please even the Nigel Tufnels of the world. The guitar's compound-radius makes it incredibly easy to play. Sustained, steady riffage and hurricane-speed shredding both end up being a piece of cake. Its low action also lends a hand to the instrument's shredding prowess, while also paving the way for titanic string bends. Lean, mean and incredibly easy on the wallet, the Jackson King V JS32T is certainly a force to be reckoned with.

The latest evolution in Ibanez's S series, the S521 gets you the look (and a lot of the great tones) of an Ibanez at a terrifically low price. The guitar's rosewood fretboard is two-octave and features 24 jumbo frets, while its mahogany body is coated in an eye-catching burst finish. Quantum pickups (in the neck and bridge) plus a five-way switch also come standard. Overall, the Wizard III maple neck is well-constructed and reliable. The Cosmo black finish on the S521's hardware adds an elegant touch to the low-budget model.

The S521's fretboard is incredibly quick, and smooth as silk. Tonally, though the guitar's cleans aren't always top-notch, its mid-range is phenomenal. On the higher end, its articulation is quite good and expressive, with leads sounding lean but nimble. In addition to its rock-solid variety of tones, the S521's sustain stands out within its price range.