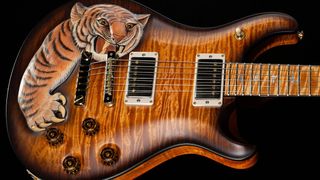 PRS is no stranger to producing ridiculously ornate electric guitars, but the company may have even topped itself with this Private Stock “Snarling Tiger,” featuring a hand-carved top by legendary wood carver, Floyd Scholz.

The McCarty 594 model features a one-piece curly maple top and figured mahogany back, as well as a curly maple neck and fingerboard with ebony binding and mother of pearl bird inlays and side dots.

The tiger, Scholz said, “was carved out of very hard maple. The alternating, contrasting grain patterns made it a challenging process. This is the first time that I've ever carved another animal onto a PRS guitar other than a bird. It's also my first big cat carving!”

Pickups are a pair of PRS 58/15 LY humbuckers, controlled by two volume, two push/pull tone controls and a three-way toggle.

The guitar is finished in a Satin Nitro Antique Natural Smoked Burst, and is offered for a snarling $21,990.

If you want to catch this tiger, head over to Willcutt Guitars, and see Floyd Scholz's website for more info.

Scholz has previously worked with PRS on the Private Stock Harpy Eagle.