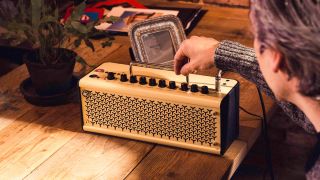 The concept of the guitar amplifier is changing. It's no longer a choice between head and combo, solid-state or vacuum tube.

Now we have digital modeling amps, amps in stompboxes, rack-mountable profilers, and amps that deliver the super-portable plug-in-and-play experience of a great practice amp but with added wireless performance and a host of features that elevates their function above mere practice. Enter, the desktop amp.

Here, in no particular order, we take a quick look at seven of the best on the market today. They're affordable and come stacked with features, and you don't even have to sit them on your desktop. These are compact enough to find a space anywhere in the home. They are what Yamaha calls "the third amp" – an amp for the home. So where better to start than Yamaha's own THR30II?

Amazon Prime Day is just around the corner. If you're looking for a new desktop amp then it could be worth waiting until the Prime Day guitar deals start landing.

These are the best desktop guitar amps you can buy

The Yamaha THR series doesn't look much like a guitar amplifier, and that's the idea. Styled after home audio equipment, the THR30II can sit anywhere in the home, and the non-guitarists can stream music to it via Bluetooth.

The guitarists, however, are in for a real treat, because this is a serious desktop amp from the pioneers of desktops amps. With convincing onboard modulation, reverb and delay effects, 15 amp tones courtesy of Yamaha’s Virtual Circuitry Modeling, there is a whole lotta tone here. A pair of  1/4" line outputs make it a great option for home recording.

Blackstar’s BEAM (Bass, Electric, Acoustic and Music) is a popular desktop solution. It’s compact, so it’s great where space is limited, and it features the familiar range of Blackstar clean and overdrive sounds, together with studio-quality modulation, delay and reverb effects.

You can stream music via Bluetooth, although you’ll need a USB cable to get into deep editing with Blackstar’s Insider software. What the BEAM lacks in features and models it more than makes up for by being simple, fun and great value for money to boot.

Not quite a desktop amp but still a potent rival, Marshall’s CODE25 has a cracking remote editing app that really makes the amp come alive. Again, the CODE streams audio via Bluetooth making it a great play-along tool. No stereo here, but a beefy 10-inch loudspeaker makes it more of a ‘proper’ guitar amp, capable of handling the odd small gig with ease.

There are 14 preamp models, four power amps and eight cabs, with 24 effects – you can use up to five simultaneously. Best news is the price: at $340 MSRP, and available at heavy discounts across the web, the CODE25 is amazing value.

While Fender could be considered a traditionalist in the amp field, the Mustang GT40 should blow away that image. It hooks up to Fender’s Tone portal with its own Wi-Fi connection, offering a huge library of presets. Just squeezing onto an average desk, a pair of six-inch loudspeakers and 2x20-watt output stage give the Mustang impressive sonic authority.

Now on v2.0 firmware, the updated Mustang benefits from extra models, presets and user requested features. You can stream audio and edit patches from across the room, thanks to Bluetooth.

The Katana amps have been a big success story, with Roland adding its digital might to make them a popular choice for guitarists wanting to jump to digital. The Katana-Air’s boast is that it was the first fully wireless amp of its type, bundled with a Boss guitar transmitter.

There are just five amp models, but they’re truly awesome and you can access over 50 Boss effects. Audio streaming and editing via Bluetooth is standard, and the Katana can run on batteries. Power output is a respectable 30 watts (2x 15 watts) when plugged into the mains adaptor.

Now owned by Yamaha, Line 6 probably has the most powerful combined digital resources of any amp manufacturer. The AMPLIFi 30 scales down its control panel to the essentials while making full use of the remote mobile app. The amp models and effects are as good as it gets and, like the AMPLIFi’s competitors, you can stream audio to it.

But that’s just for starters – you can also blend volume levels, slow tracks down and loop sections, while the online part of AMPLIFi suggests presets and patches that work best for each music title.

This is a strong player in the desktop amp field, helped by Vox’s partnership with another giant in the digital music field, Korg. It has a powerful 50-watt (2x 25-watt) power output, 17 amp models and up to 19 effects. The Adio can do audio streaming and remote editing via Bluetooth using Vox’s Tone Room app, and it can run on alkaline or rechargeable batteries.

The Adio is also bundled with the popular Jamvox app. There’s no guitar wireless, but you can buy one of several popular transmitter/receiver kits to use with the Adio Air.