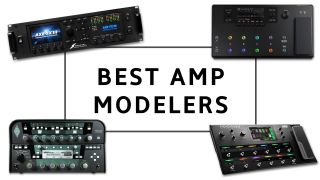 When players hear the phrase 'amp modeling', they probably bring to mind one of two things. Guitarists of a certain age will remember fondly the little red bean Line 6 POD, which brought modeling to the masses, while the young guns will see the overflowing racks of modern touring bands on YouTube, with Axe-FX and Kemper amp simulators powering touring juggernauts.

The technology in our best amp modelers round-up is unrecognizable from those first innovations, and some of the higher-end gear comes complete with an eye-watering price tag, but it's not just the preserve of the pros - and we're about to prove why.

If money is no object, there's currently no better amp modeler that can beat the Fractal AudioAxe-FX III. While the Axe-FX redefined the professional modeler, the Line 6 Helix revolutionized the user interface players could expect from a high-end modeling unit. With the III, Axe-FX accepted Line 6's challenge, creating their most streamlined UI yet and marrying it to their best simulations and effects.

If, however, money is limited, there are more affordable options in our best amp modeler guide too. We're huge fans of the Line 6 Helix LT, a leaner, more affordable version of the full fat Helix, including the same dual-DSP architecture. Positive Grid's BIAS Amp II is also a winner. It runs inside your existing digital audio workstation, like Logic and you can build custom amplifiers, profile amps you own, load impulse responses that simulate specific guitar cabs, and, with the BIAS head, take your tones out of the studio and onto the stage.

When it comes to guitar amp modelers, they come in two main flavors - rack and floorboard. The big sluggers are the Axe-FX and Kemper, both of which are rack units - although the Kemper does have a head version too.

When Line 6 entered the market with their innovative Helix system, they brought it out in two formats. First, the floorboard, familiar to those that had already used POD floorboards and Line 6 multi-effects in the past, and a rack version.

When choosing the best amp modeler for you, the main considerations should be the user interface. That is, how you interact with it, how easy it is to use and the quality of the models themselves. Though it's tempting to buy based on the number of patches, the interface is more important.

Manufacturers will boast an eye-watering number of presets, but most units will allow you to add new presets and Impulse Responses (IRs). From our experience, a lot of players will only dive deeper once they've found some core sounds they're happy with.

Finally, there's the tech specs. What’s the resolution of the DSP audio engine? Is there any noticeable latency? What inputs and outputs are on offer? Some units allow you to share tones and presets on the internet and many allow you to load new IRs.

If you want to play live, probably the most important consideration is whether it has a power amp built-in or not. Most of these units will use their digital modeler as a preamp, like the pre- in a traditional guitar amp. However, if they don't have a power amp – like the power tubes in a valve guitar head – then it won't be able to drive a speaker, and you'll need to buy a separate power amp.

Check out our best amp modeler top picks below. We've also done some digging to find the very best deals.

The best amp modelers you can buy right now

Enjoy the Helix experience on a budget

£769
View at Bax-shop UK
£916.66
View at Amazon
See all prices (3 found)
A leaner version of the full-fat Helix
A great live option
A first-rate studio tool
Fewer inputs and outputs

The Helix LT is the floorboard-only little brother of the full-fat Helix. It has the same dual-DSP architecture of the larger unit, but removes the scribble strips and slims down the input and output options, resulting in a leaner beast.

Luckily, these changes are unlikely to affect most players, and if you don't want a rack version or extensive MIDI and CV control, then we'd probably say this is not only the better choice for your needs, but also for your wallet.

Finally, for an extra hundred bucks, you can get the Helix Native plugin, which allows you to use Helix models directly in your DAW.

If you can afford it, the Axe-FX is one of the best amp modelers you can buy. Not only does it have the best tones in the business, but it's got hundreds of them. Sure, the first Tesseract album was recorded largely with a Line 6 POD, but their signature sound is the Axe-FX FAS Modern. Periphery, Coheed and Cambria and Devin Townsend you say? Yep, they’ve used Axe-FX too.

The Axe-FX III has an overhauled user interface that, unlike previous versions, can finally go toe-to-toe with the intuitive Line 6 Helix. Although we're only concerned with amp emulation here, the Axe-FX has hundreds of brilliant effects as well as powerful, studio-grade EQ and gating options, so that's certainly worth considering, especially for recording.

Hate menus? Get an amp feel from your modeler

With a more amp-like front panel than many of its competitors, the Kemper is the best amp modeler for players who want to be eased into the simulation experience, hiding a huge amount of depth behind its simple user interface.

There's a rack version for those that want to use it in a studio or ship it in a rack, or a head version that comes with a power amp, so that a speaker cab can be attached. For both, there's the option of a floorboard. There's also, as of Summer NAMM 2019, an all-in-one floorboard is on the way.

For every band that's using the Axe-FX, there's a band that’s running Kempers. They're a core part of the live rig of bands like Biffy Clyro, and Tesseract switched from Axe-FX to Kemper for their most recent album Sonder, using a patch based on a custom-captured Diezel head.

Get more headroom with the Headrush

Check Amazon
Modern, stylish interface
Wide choice of sounds
Full and rich sounding
Some may struggle with the touchscreen

With a quad-core DSP and luxurious 7-inch touchscreen, the HeadRush certainly goes all-out on hardware. In terms of the fidelity and feel of the amps, it's more 'open' and 'full' than most of the Helix models, and the way models respond to playing dynamics seems more subtle and more rich than other top-flight units.

So what's the catch? Well, on paper the 7-inch touchscreen should be a great user experience, but in practice, it's often harder to use than a joystick or arrow buttons, resulting in a great-sounding, but often frustrating floorboard.

Atomic’s original Amplifire unit became a favorite with many guitarists as it represented an affordable and compact option compared with the well-known amp modeling rigs. The Ampli-Firebox puts amp modeling and IR-based cabs, plus a selection of effects, into a compact stompbox with a tiny footprint.

Boasting dual simultaneous outputs, the Firebox offers nine programmable presets on board, each based around a specific amp model. Modeled amps include familiar classics like a Fender Deluxe and ’59 Bassman, an AC30 Top Boost and various Marshalls to newer stuff like a Cornford and Friedman.

Factor in the amount of editing power, particularly with EQ and IR loading, and there’s a lot of scope to create authentic sounding and playing amp tones that are capable of holding their own against more expensive options.

Place Roland’s expertise at your feet

The Boss GT-1000 was the first floorboard modeler released by Roland following the Helix taking the fight to Axe-FX and Kemper. With a proprietary DSP and ports of effects from their flagship DD-500, MD-500 and RV-500 pedals, there's a lot going on under the hood.

The amp simulations are second-to-none, thanks to the Augmented Impulse Response Dynamics (AIRD) tech, which gives the impression of even more 'air' and harmonic richness than even the Headrush.

However, the user interface has not changed with the times, reminding us more of our old rack gear that, while powerful, required power-user level knowledge to edit and operate. The GT-1000 sounds fantastic, but many of its competitors on this best amp modeler list leave it in the dust in terms of usability.

The best amp modeler when it comes to user interface

The Helix LT is probably more than enough for most players, but if you want to send CV or control a whopping three expression pedals, then the full-fat Helix could be the best amp modeler for you.

For the extra cash you get some additional affordances like scribble strips and additional inputs, though the DSP and software is the same. Crucially, the user interface is the best on the market right now, and that's why you'd buy the Helix over the Kemper or Axe-FX.

Alternatively, you can opt for the rack version if you have a studio or want the ability to neatly flight-case the unit, though you'll need to separately purchase the Helix Floor Controller if you want a floorboard to control it.

The best amp modeler for power and performance on a budget

It might not have the sampling rate or bit depth of the trailblazing GT-1000, but for a fraction of the price the GT-100 certainly isn't bad. Yes, there are many better options on the market (all of which are on this list), but like anything else, ten years ago this amp sim would have blown away the best studio gear available.

With a host of amp models that cover the main bases, from bluesy to high-gain metal, the GT-100 is a workhorse that will get you to your band's first demo tape and beyond, even if it's unlikely to be a tool you hang on to forever.

The best amp modeler if you're already sold on BIAS Amp

The BIAS Head ships with 25 built-in patches, and a pleasantly familiar amp-like interface on the front panel. The real power comes from hooking it up to a computer or device running the BIAS software, as you can tweak and load new patches directly.

Especially if you're already a BIAS owner and use it in your DAW, the BIAS head is a great bridge to using the software live, especially given the quality on offer with the latest BIAS Amp II.

If you're looking for an interface to flight-case or put into a studio setting, there's also a rack version, though without effects like its competitors, at that point you might want to explore more all-rounder solutions.

About the author
Alex Lynham is a gear obsessive who's been collecting and building modern and vintage equipment since he got his first Saturday job. Besides reviewing countless pedals for Total Guitar, he's written guides on how to build your first pedal, how to build a tube amp from a kit, and briefly went viral when he released a glitch delay pedal, the Atom Smasher.