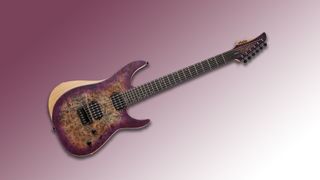 It’s Black Friday 2019, which means shoppers the world over are frantically searching for the best guitar deals on the web. Luckily for you, the Guitar World staff are compiling and curating what we think are the best of the best - simplifying the process for you.

So far, we’ve seen some of the best electric guitar deals over at Musician’s Friend - and this deal is no exception. They’ve knocked $120 off this awesome Schecter Reaper-6, making it only $579 for a limited time only.

The Reaper-6 boasts a swamp ash body - a material famed for its good sustain, bass tones and strong midrange.

The guitar has a poplar burl top, which when married to its Aurora Burst finish, creates a characteristic and rather fitting necrotic visual effect - a look which pairs perfectly to metal playing styles.

Featuring an ultra-thin C-shaped neck, 24 frets and a 25.5” scale length, this guitar is built for everything from light-speed solos to crushing riffs - and to allow you to switch between the two with ease, for that matter.

Loaded with intensely high-output Schecter Diamond Decimator pickups, both solos and riffs will cut through with razor sharp effect.