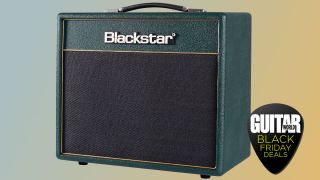 UPDATE: This deal has sold out! But there are still plenty of killer Musician's Friend deals to be had...

If thereâ€™s one thing Blackstar has proven since starting out 12 years ago, itâ€™s that you can easily find boutique guitar amp tones without the boutique price tags.

This KT88-driven Special Edition Studio 10 in emerald is a great example of its classy looks and rich, warm tones. So here comes the good news â€“ Musicianâ€™s Friend has just slashed it down by $150 for Black Friday, making it just $399!

The inclusion of the ISF feature means that, though this is a British-style amp at heart, you can dial in more scooped and glassy American tones associated with 6L6-type valves.

Donâ€™t be fooled by its 10-Watt rating either â€“ this little combo sounds huge and is loud enough for smaller gigs, though users can still hear those valves being driven on more home-friendly settings.

As well as built-in reverb and a Celestion Seventy-80 12” speaker, it also come with a series effects loop and footswitchable boost.

Bearing in mind Blackstar amps have been used by members of some of the worldâ€™s biggest bands â€“ from Ozzy Osbourne, Alice Cooper, Manic Street Preachers, ZZ Top and Supergrass to countless others - this is a great chance for massive savings on massive tones over at Musician's Friend.

Blackstar Friday: save $150 on this Special Edition Studio 10
From gorgeous cleans to earthy blues tones and full-on heavy metal thunder, youâ€™d be hard-pressed to find a better an authentic all-tube amp for under $400.View Deal

Robert Cray: "With solos, I just improvise and let it fly. Itâ€™s what youâ€™re feeling right then and there"