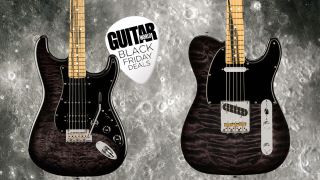 Both models are named after their striking Pale Moon ebony fingerboards, complemented by black quilt maple veneers on their alder bodies.

You’ll find Fender Custom Hot pickups in both guitars, as well as black scratchplates and either chrome or black controls.

These American-made models are highly limited and available now for $2,499 each from Guitar Center.