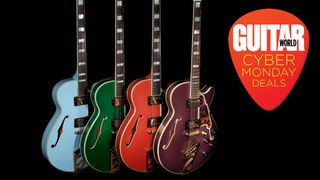 This is a deal offering depth and width, offering up to 60% off 35 different semi-hollow electric guitars  in a wide variety of finishes, and it has to be seen to be believed.

D'Angelico's Deluxe Series includes guitars such as the Deluxe 175, a vintage-style, semi-hollow singlecut that features TV Jones pickups, a gold Bigsby B-30 vibrato, block inlay, a graphite nut, and locking Grover tuners to help keep things in order. Or guitars such as the built-to-rock DC with stop-bar tailpiece, with a pair of Seymour Duncan 59 humbuckers in neck and bridge and laminate maple construction for a neat, bright-sounding twist on the ES-style semi-hollow.

There are too many to list here so we'd suggest heading on over to ProAudioStar right now to have a look. Again - thought a handful of the bunch have sold out - there are still almost three dozen to choose from. What's really insane is that you can get even more money off with coupon codes.

But here are three of our favorites from this mega-deal...

SOLD OUT D'Angelico Deluxe Series EXL-1: $799 at ProAudioStar
A quite beautifully constructed jazz box, the EXL-1 is a contemporary homage to master-builder John D’Angelico’s original archtop design. It's big, 17-inches across, but it's got a super-comfortable slim-C profile neck and a meticulous finish and feel courtesy of the thick gauge Jescar wire frets. A floating Seymour Duncan mini-bucker handles the tone. Sweet!View Deal

D'Angelico Deluxe Series DH: $799 at ProAudioStar
Now here is a vintage-style semi-hollow singlecut with a lot going on tonally. There are two Seymour Duncan DA-59 humbuckers in the neck and bridge, with a six-way toggle switch for selecting either, both, or splitting the pickups into singlecoils, and blending both singlecoil options together. This is a hugely versatile guitar that's as happy with bebop as it is with rockabilly.View Deal

D'Angelico Deluxe Series SS: $799.99 at ProAudioStar
The Deluxe SS has a similar setup to the Deluxe DH, with the Seymour Duncan DA-59 humbuckers and smart six-way toggle switching, but it comes in a smaller body, making it ideal for those who like the idea of a semi-hollow electric but baulk at the bulk. Tone-wise, it's huge, though. And like the rest of the series, the build quality is exceptional.View Deal